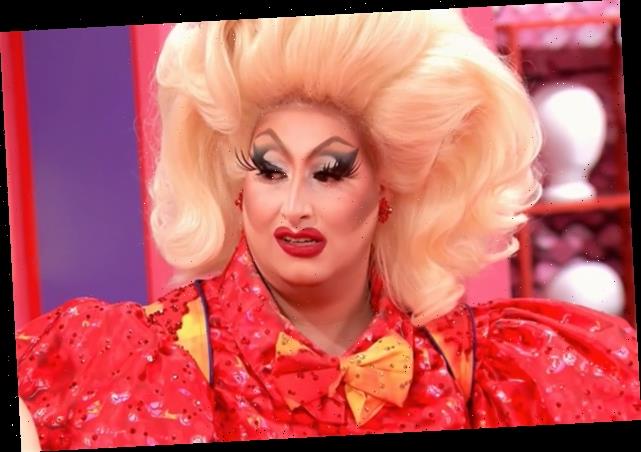 Let’s start with a quick breakdown of the workroom’s latest additions: There’s Rock M. Sakura, who’s basically the surprisingly muscular love child of Sailor Moon and the Dodo from Looney Tunes; Dahlia Sin, a cocky look queen formerly from the Haus of Aja; Jan, who — bless her heart — entered with a wonderfully obscure reference to Fergie’s iconic rendition of the National Anthem that no one seemed to catch; Jaida Essence Hall, a well-shouldered diva who considers herself more of a “female impersonator” than a drag queen; and the oh-so-spooky Aiden Zhane, who came to “slaughter” the competition… possibly literally.

We also met Sherry Pie, who — for the first time in Drag Race herstory — was disqualified from the competition before she even made it to air. Here’s the story: On Thursday, an explosive BuzzFeed News report revealed that Sherry (real name Joey Gugliemelli) spent several years posing as a casting director in order to solicit embarrassing and inappropriate audition videos from young aspiring actors. Gugliemelli released an apology statement shortly after that news broke on Thursday, prompting VH1 and World of Wonder to confirm on Friday that Sherry has been disqualified. The season will air as originally filmed and edited, but Sherry will not be invited to the live finale taping this spring.

Just as the seven queens did last week, these six had to wow the judges with spring and fall looks for their first mini challenge. And just like the others, they turned it out. Rock gave the judges full “Harajuku fantasy” with a kimono-based outfit she painted herself; Dahlia served up a sexy pair of puffy, poodle-inspired looks; Jan channeled the legendary Marie Antoinette; and Aiden came out looking like Wirt from Over the Garden Wall. Sherry also put in a good effort, but her fall look appeared better suited for a funeral than a runway — which is kind of ironic, considering she’s basically already a ghost in the competition.

After slipping out of drag and scanning the workroom for potential trade — Dahlia seemed to be the one garnering the most attention — the queens began working on this week’s maxi challenge, a “Fosse-inspired” musical number called “You Don’t Know Me.” And even though they bickered like little kids throughout the entire process, they eventually made nice in the workroom while preparing to hit the runway. Rock even shared a painful memory from her past, revealing that his drug-addicted mother blamed him for her addiction, which is why he isn’t comfortable being responsible for other people in the competition.

As it turned out, the Fosse-inspired number was actually just a parody of Chicago‘s “Cell Block Tango,” with each queen using a verse to introduce herself to the judges. Generally speaking, the performances were well-received — even Rock, who decided to play her character like a ’20s mobster… with a farting problem.

For the most part, the queens’ tulle-centric runway looks were also well-received. Aiden kept things simple with a cute lime green princess look, Dahlia conjured up a devilish ’80s glam ensemble, Jaida remained the picture of elegance in a yellow cupcake gown, Rock (allegedly) wrapped herself in 850-ish yards of multi-colored tulle, and Jan subverted expectations by dressing like a construction worker (with a “tulle belt”). And Sherry came out dressed like a cloud, which once again felt fitting, as she rained on her own parade this season.

Aside from Aiden, whose tuck is simply too meaty, and Dahlia, who isn’t being loud enough, the judges didn’t have too many critiques this week. In fact, I dare say that guest judge Thandie Newton was a little too generous, comparing contestants to the likes of Demi Moore and Meryl Streep. And once again, everyone was gagged when the last queens standing were actually revealed to be the top two. (Even though we knew that twist was coming this time, I still enjoyed watching the queens’ varied reactions.)

In a masterful twist of dramatic irony, Sherry won her lip sync against Jaida, making her one of the first big winners of Season 12 — even though she’s literally entering the competition as a loser.

Your thoughts on the second half of the Season 12 premiere? Vote for your favorite new queen below, then drop a comment with more of your thoughts.

Training 'ghost' teachers costs the taxpayer up to £123million