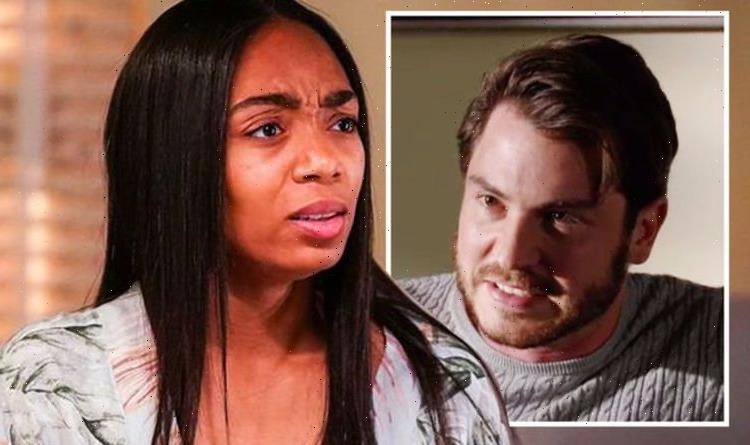 Chelsea (played by Zaraah Abrahams) had a very turbulent end to 2021 on EastEnders having married killer Gray (Toby-Alexander Smith), finding out he murdered his first wife Chantelle Atkins (Jessica Plummer) and giving birth to her baby boy prematurely. With a New Year dawning on the Square, the mother of one will be trying to plan an escape from the Atkins household as she knows it’s only a matter of time before her husband loses his temper with her. However, in future episodes of the BBC soap, she could turn the tables and be the one to kill Gray, giving him a taste of his own medicine as history repeats itself from almost a year and a half ago when he murdered Chantelle.

The drama begins next week as Chelsea begins to feel she is trapped living with her husband, knowing he is capable of killing her or hurting her at any time.

When Whitney Dean (Shona McGarty) manages to get around to the Atkins house, she encourages her to play the long game as they will expose Gray eventually.

But with her son fighting for his life in hospital, the mother of one wants to focus on him instead of worrying about whether she is going to be bumped off.

She admits to her friend it is going to be hard to pretend everything is fine but she knows her spouse will slip-up at any moment.

Putting her fears to the back of her head, Chelsea prepares a meal for Gray and acts as if they were all happy families for now.

However, this could all be a cover for what is actually going to happen on the night of the meal as Chelsea has a plan in mind.

In September 2020, Chantelle was killed when her husband violently pushed her and she went flying into an open dishwasher.

The knives were pointing upwards and she was impaled on them and Gray watched as her life drained away, before he made it look like an accident.

Having lived with her husband for long enough now, Chelsea will have heard about the circumstances behind Chantelle’s ‘accidental’ death.

Making history repeat itself, this is what the mother of one could be orchestrating to make sure her spouse is dead once and for all.

Really pivoting it back to its origins

As she cleans away the dirty utensils she has been washing up, Chelsea could leave the dishwasher door open, so it’s in the perfect position for when she confronts Gray.

Starting to speak to him more about Chantelle, the mother of one could push towards her husband, who steps backwards into the dishwasher.

With the knives pointing upwards, as he had instructed his wife to place them, he could trip on the door and find himself in the same position Chantelle was in when she died.

Fighting for his life, he could try to plead with his partner to help him, using emotional blackmail to try and speak to her conscience.

Instead, she could call Whitney around so they could both watch the villain as his life begins to slip away from him, impaled by knives in the dishwasher.

The two women would have to make it look like an accident so neither of them are suspected by the police of killing the mass murderer.

Chelsea could explain she was cooking and when her husband tried to help her, he simply slipped and fell onto the knives.

She could add she called Whitney as she had previously been an employee for the Atkins family and might know if there were first-aid resources in the house.

However, when Whitney arrived, he was dead and she was the one who called the ambulance as Chelsea was too distraught to do anything.

But will the authorities fall for the story or will they be looking for a suspect as they launch an investigation into Gray’s death?

Taking to Twitter, fans have been demanding an end to Gray’s reign of terror on the Square as they believed he was going to be caught out over the festive season.

Jade wrote: “So when is Gray going to get caught? All that build-up for him to be found out at Christmas @bbceastenders #EastEnders.”

Conor added on the social media platform: “Honestly depresses me that Gray is still walking about when he should’ve been found out at Christmas #eastenders.”

“There is a new dawn coming into #Eastenders and I can’t wait to see what’s in store in 2022. Hopefully, there will be a dramatic climax to Gray’s storyline as well,” Ryan commented.

The bosses behind the show teased last summer Gray’s ending is in sight after he arrived on the Square almost three years ago.

Head of Continuing Drama at the BBC, Kate Oates, said: “Gray’s story was always intended to be a longer arc after the death of Chantelle.”

Executive producer Jon Sen added: “We’re building to the kind of culmination of the Gray storyline.

“And that takes it’s next chapter. It has been a very long story arc and it’s taken many twists and turns, but we are kind of going back to the grassroots of the story.

“Really pivoting it back to its origins. It’s going to be a fascinating turn of events for the Atkins family,” he told Metro.co.uk.

EastEnders continues Thursday at 7:30pm on BBC One.