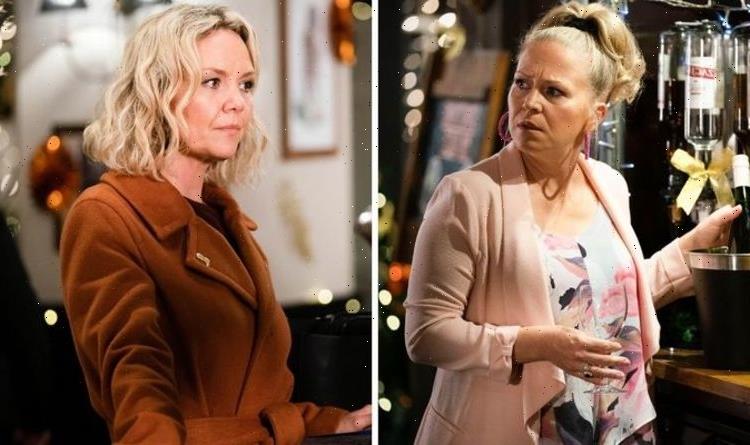 EastEnders heartache as Linda returns to the Square following Mick and Janine affair?

EastEnders: Maisie Smith on her exit and possible return

EastEnders favourites Mick (played by Danny Dyer) and Linda Carter (Kellie Bright) usually seem to have the perfect relationship, but the couple were almost torn apart by Max Branning (Jake Wood). Linda became pregnant with Max’s child, but Mick agreed to raise the baby as his own. After Rainie Highway (Tanya Franks) threatened to tell Max about the baby though, Linda decided she needed to leave the Square. With the barmaid set to make a comeback over Christmas, could she be confronting her husband over his sudden closeness with manipulative Janine?

Mick and Janine have become close since she began working at The Vic, and fans are beginning to speculate the two could soon start an affair.

Spoilers from the soap have confirmed Linda will be back on the Square soon.

Actress Kellie, wh made the exit to be on maternity leave, will make a brief return as Linda over the festive season.

Linda was last seen in September fleeing Walford with her new daughter, Annie.

Desperate to keep the truth about Annie’s real father, Max Branning, from being exposed Mick helped get his wife away from Walford.

However, since then Mick has returned to The Vic alone but what is really going on?

Linda’s appearance will see her marriage set to go through the ultimate test – Janine.

Determined to find out what is really going on between Linda and Mick, Janine decides to track Linda down and in ultimate Janine fashion, she is determined to use it to her advantage.

Could Janine tell Linda that she and Mick have had an affair after she learns about Max?

Fans of the soap seem to think the landlord might actually cheat on his wife.

Twitter user Emma Louise Delaney wrote: “Will be so p***** off if Janine and Mick have an affair #eastenders.”

“Mick and Janine on the brink of a passionate affair #eastenders,” Doc Joel shared.

Amy added: “Unpopular opinion, I’m up for a Janine and mick affair #eastenders.”

Echoing this, Owen asked: “Is it bad that I am all for a Janine and Mick affair?! #EastEnders.”

It wouldn’t be unlike Janine to meddle in a couple’s relationship, and she is always one to find out what’s been going on in peoples’ lives.

Using the Max affair to her advantage, it’s possible she will lay into Linda for cheating on Max and might inform her that she has also been getting close to Max.

How will Linda take the news?

EastEnders spoilers indicate it will be a brief return of the Albert Square favourite, so could she decide to leave Mick?

Fans will be heartbroken to see the couple split, but once Janine sets her mind on something she usually manages to make sure it happens.

EastEnders continues on Thursday at 7.30pm on BBC One.