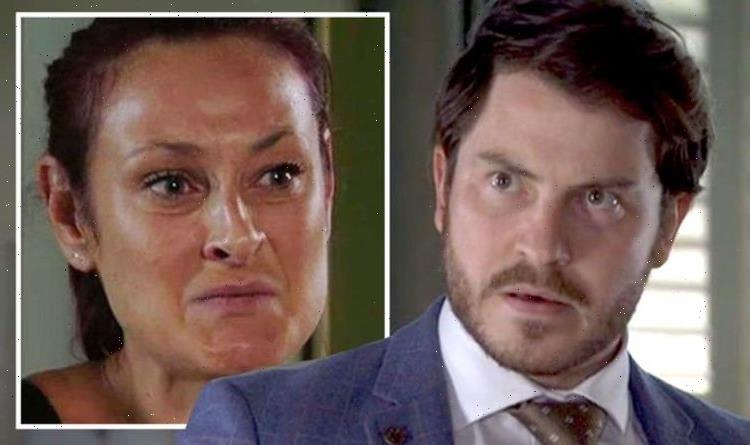 Tina (played by Luisa Bradshaw-White) was killed off just 12 months ago by EastEnders serial killer, Gray Atkins (Toby-Alexander Smith) as she became his second victim. Over the past year, her sister Shirley Carter (Linda Henry) has been desperate to know where she is, with her sibling’s killer throwing her off the scent he murdered her by stating he has seen her out and about around London. Unfortunately, this isn’t the case and he has left her body somewhere to ensure any evidence of her death does not point back at him. In an episode airing earlier this week on the BBC soap, he gave a big clue as to where he could have dumped her corpse.

During the show’s New Year’s Eve episode, it was explained the far-right group had planted a bomb in the premises which used to be where the Arjee Bhajee restaurant was run from.

There were plans to develop the site into a local mosque and it was Aaron Monroe (Charlie Wernham) who was tasked with detonating the explosive device.

After some persuasion from his father, Harvey Monroe (Ross Boatman), the youngster failed to complete the orders he was given and instead, his father tipped off the police about the bomb.

This news shocked the residents of the Square to the core and it was the talk of the town during Tuesday’s instalment of the weeknight serial drama.

It was the look on Gray’s face when he overheard a conversation which led many fans to believe he had left Tina’s body in the Arjee Bhajee.

Kathy Beale (Gillian Taylforth) was seen discussing how the police were swarming the area and she worried her gay bar, the Prince Albert, was the target.

She explained to Gray, who was ordering food, how the investigation meant development to turn the Arjee Bhajee into a mosque had been slowed down.

The villain displayed a concerned look on his face whilst trying to ensure he didn’t look too suspicious as he knew his past could catch up with him.

Taking to Twitter, viewers noticed his unsettled demeanour and guessed the restaurant could be where Tina’s body is.

Jade wrote: “#EastEnders Even if Tina was buried in the Arjee Bhajee, depending on what Gray did with her body it is possible she would literally just be bones by now.”

is Tina buried under the restaurant?

“There would be no reason for people to think it is Tina as everyone thinks she’s alive- Gray was texting Shirley until recently,” they continued.

Tom added: “If this look is anything to go by from Gray I’m hoping this storyline is about to end in a very sinister way and this is where he is hiding Tina’s body! Dark – but brilliant. #EastEnders.”

Meena commented on the social media platform: “Surely Gray isn’t that dense to hide Tina’s body so close to where he lives #eastenders.”

Bobby remarked: “#EastEnders is Tina buried under restaurant? The look on Gray’s face when Kathy mentioned about delays.”

“What was that reaction from Gray, when he heard the delay of the Mosque all about? Is Tina being held in the Arjee Barjee,” Walford Weekly podcast shared.

This would solve the mystery for viewers about where Gray was keeping her and for the Carter family as they realise Tina is dead.

Whether or not the police are able to determine if she was killed is yet to be seen as the killer could have covered his tracks well.

If he has managed to get rid of all the evidence pointing back to him, Gray could get away with murder all over again.

Shirley could be suspicious of her neighbour as he is the one who has been offering her hope her sister was still alive.

Could she be in danger as she gets dangerously close to discovering the truth about living on the same Square as a mass murderer?

Tina’s body is the only one Gray has had to hide because his other two victims were taken away by ambulances before being buried.

Chantelle Atkins’ (Jessica Plummer) death was ruled as an accident, although Gray killed his wife during a very heated argument a few months before Tina.

He also murdered Kush Kazemi (Davood Ghadami) to stop him from taking Whitney Dean (Shona McGarty) away from Walford.

Neither of those deaths have been blamed on Gray so could the discovery of Tina’s body be the moment he’s finally caught out?

Having just married Chelsea Fox (Zaraah Abrahams), who has also given birth to their son prematurely, the killer would want to avoid jail.

So will Gray convince Chelsea they need to flee to begin a new life abroad where no one will bother them ever again?

His downfall will be happening very soon as almost two years after first stepping foot onto the Square, Gray might finally feel the pain he has inflicted on others.

Speaking about the future, executive producer Jon Sen said: “We’ve obviously got the culmination or we’re building to the kind of culmination of the Gray storyline.

“It’s kind of [the] next chapter. Obviously, it has been a very long story arc and it’s taken many twists and turns.

“But we are kind of going back to the grassroots of the story, really pivoting it back to its origins, and it’s gonna be a fascinating turn of events for the Atkins family.”

EastEnders continues tonight at 7:30pm on BBC One.