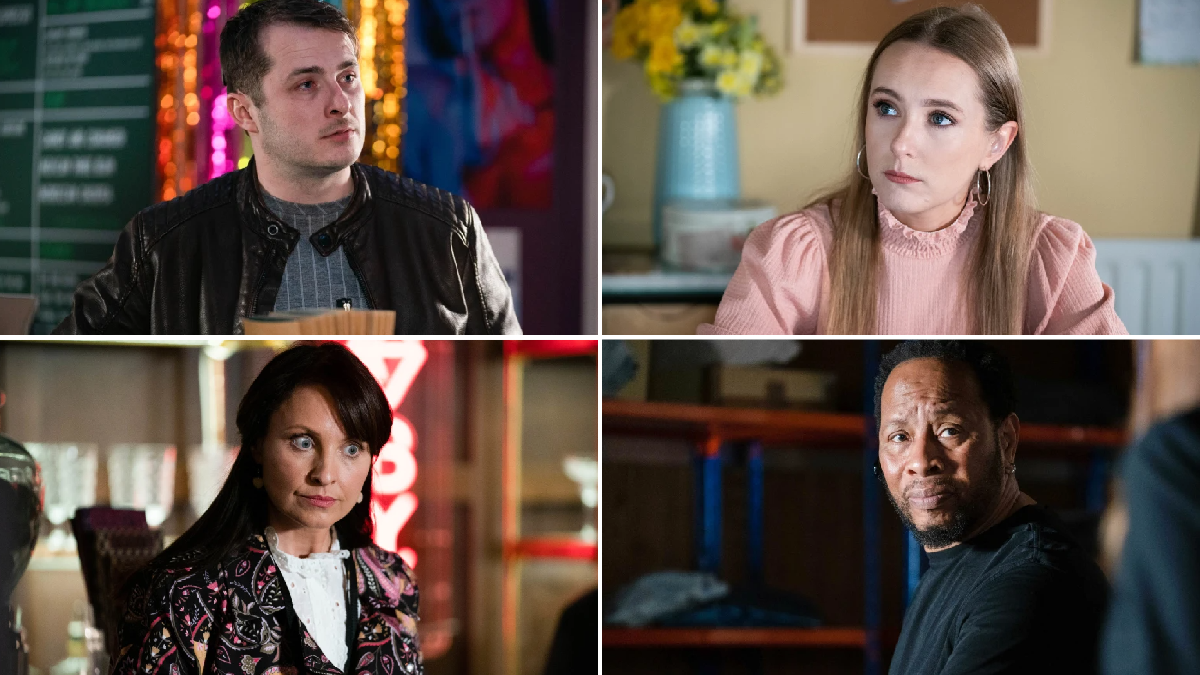 Devastating traumas are everywhere in EastEnders and Ben Mitchell (Max Bowden) is set to have his life destroyed when he is raped by Lewis (Aidan O’Callaghan). But in the wake of the vile attack, will Ben speak out about what has happened?

Meanwhile, Stuart Highway (Ricky Champ) continues to struggle with baby Roland and Rainie (Tanya Franks) discovers his secrecy. Can they get through this?

Lola is distraught to learn that Isaac has met someone else and isn’t coming back. Honey overhears the conversation and can’t help but talk about how great Jay is.

Outside, Frankie invites Jay to Clara’s photography exhibition and when Lola spots the exchange, she gets the wrong end of the stick. Clara isn’t happy to see Frankie stealing her thunder and things get worse when Lola barges in and accuses Jay of cheating with Frankie causing a scene. Clara enjoys the drama.

Jay insists to Lola that nothing is going on between him and Frankie and Lola eventually breaks down, revealing Isaac has dumped her.

Callum fumes at Ben for telling Lewis about his vigilante actions leading to a huge argument between the couple. With tensions at an all-time high, both share some difficult words leaving them left wondering if this is the end of their relationship.

With Ben at The Vic drowning his sorrows, Callum is forced to cover when Lexi arrives for a sleepover and questions where Ben is.

Despite his better judgement, Ben spots Lewis on a dating app and sends him messages before meeting him for drinks. As Lexi makes Callum think again about his marriage, a drunk Ben flirts with Lewis.

With The Albert shut, Lewis and Ben head upstairs and one thing starts to lead to another. However when Ben receives a selfie from Callum and Lexi, he has second thoughts and tries to leave but Lewis refuses to let him go and rapes him.

Stacey refuses to let Lily stay off school to look after Jean but after seeing how much Jean needs her she apprehensively agrees.

Sam spots Ben coming out of The Albert and winds him up about staying out all night. At their flat, Callum is suspicious about where has Ben has been but when they bump into Lewis, Lewis lies and says they were both out on the town last night.

In shock from what happened the night before, Ben confronts Lewis about his actions but Lewis tells him that he was the instigator. Alone, Ben looks over his messages to Lewis but is spotted by Jay who is unimpressed to see what Ben has been up to.

Meanwhile, Callum tries to collect his thoughts but Sam passes by and winds him up, telling him she saw Ben coming out of The Albert.

At their flat, Callum bluntly asks Ben if he slept with Lewis and with Ben still processing everything that happened, he doesn’t deny it. Devastated, Callum walks out.

Mick shares his plans for the Jubilee celebrations with Sonia and Kathy but when Rocky hears, he puts his foot in it with Sonia.

Desperate to rebuild their relationship, he tries to get Sonia to join in planning the event but she turns him down making Rocky more determined than ever to impress her.

Mr Lister offers to take Honey for a drink but feeling awkward, she makes an excuse and rushes off.

Later, a firm Honey tells Sam she needs to move out as soon as possible leading Sam to put the pressure on Denise to get her money. Elsewhere, Lola tries to make things up to Frankie and takes her for a drink.

The pair bond and Lola encourages her not to sell her photography equipment despite not having any work.

Kathy is stunned to hear from Stuart that Ben apparently cheated on Callum and when she sees Jay’s reaction to the news, believes it to be true.

Jay confronts Ben about what happened. Ben goes to talk to Lewis but is confronted by a fuming Kathy who shares some strong words.

Ben tells Callum how much he loves him, but will Callum believe him?

Rainie discovers pills Stuart has tried to dispose of and realises Stuart has been lying about taking his painkillers. Rainie questions why Stuart would make her believe he’s addicted again but Stuart rushes off to his chemotherapy appointment and avoids Rainie.

Kat is concerned when Lily stays off school again to look after Jean and confronts Stacey, telling her this isn’t right and suggests she stays with Martin for a few days.

Meanwhile, Kat puts the pressure on Sam to find the money for Ruby’s, especially with Jonah still circling.

Rocky is determined to prove to Sonia that he can follow through on what he says and pushes on with his plans for the Jubilee celebrations.

Jean refuses any care from Stacey and when Lily returns from Martin’s, Stacey is forced to put her foot down – Lily is not caring for Jean anymore.

Outside, Shirley bumps into Harvey and encourages him to go and see Jean. Despite a rocky start, they have a breakthrough when Jean helps him with a jigsaw puzzle.

Rainie’s heart breaks when Stuart admits he has no feelings towards Roland. Rainie goes for some air and bumps into Mitch who can see all is not well but Rainie covers and says it’s difficult having a new baby.

Sam meets with Ritchie about her predicament with Denise’s money leading Ritchie to make Denise a threat she can’t ignore.