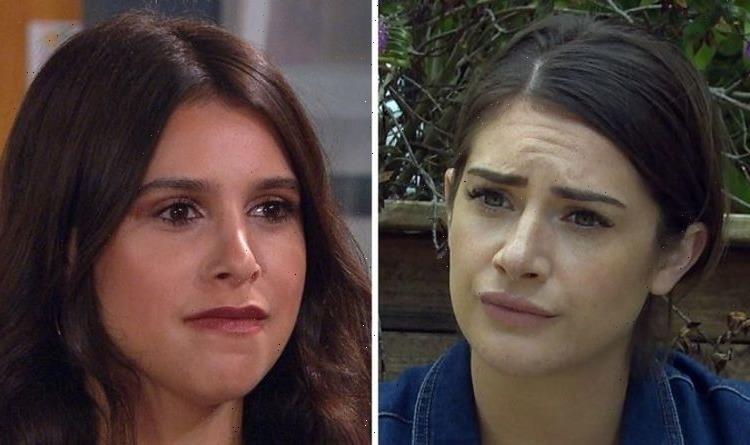 Emmerdale exit for Victoria Sugden as she’s forced to flee village from Meena?

Emmerdale viewers were left in tears after they found out it was David Metcalfe (played by Matthew Wolfenden) who was shot by Russ Posner (Rob Jarvis). With David now safely in hospital, Victoria Sugden (Isabel Hodgins) can’t help but feel guilty and think it’s her fault that David was shot. After confessing her feelings for David whilst he’s unconscious and with Jacob (Joe-Warren Plant) overhearing, could their affair finally be exposed, leaving Victoria in Meena Julta’s (Paige Sandhu) sights?

With David now in hospital, Victoria patiently waited in the hospital waiting room while Eric Pollard (Christopher Chittell) reassured her that it wasn’t her fault.

“You should go home,” Eric told Victoria, which prompted the surprised chef to reply: “No I need to be here, I want to show my support.”

With Jacob and Leyla Cavanagh (Roxy Shahidi) now out of the hospital, Victoria asked Eric: “Please, let me go in.”

“I don’t want you anymore stressed than you already are,” Eric emphasised to her, but standing her ground she replied: “I’ll be fine, I just really want to see him I’ll only be a few minutes I promise.”

Now inside the room alone with David, Victoria quietly said to him: “You do know there’s butties in the café near reception.

“I had cheese and pickle and a brew, teas a bit weak though,” she added and then broke down and begged David to wake up.

“David, open your eyes for me, even if it’s just for a second, you know after everything that happened with Lee and Luke, I never thought I’d be able to trust anyone.

“Never mind actually falling for someone, but it’s different now and when it’s just me and you and we’re alone it feels right.”

She then asked David about what he wished for when he was lying on the floor as she was trying to keep him awake.

“I think it was something to do with me and I think you feel the same way as I do,” she confessed, unaware that Jacob had walked into the room.

David’s eyes then started to flicker, but Jacob soon ran to get a nurse to check on his father and his wounds.

He told Victoria that he heard her talking, but she played off the conversation by telling him she was speaking about the butties in the café.

Later in the episode, Jacob confronted his father’s affair with Victoria and told him that he needs to make a decision between Meena and Victoria.

“You nearly died dad, think about why,” Jacob challenged continuing: “You took a bullet for someone you’re having an affair with.”

David tried to deny Jacob’s allegations, but the youngster snapped back: “Stop lying, I heard Victoria when you woke up.”

David asked Jacob what he heard, and he told him he heard enough before confronting him about his commitment issues with women.

“Stop treating me like I’m four, I’m not stupid, dad. I nearly lost you because you do what you always do, it’s always the same, you get involved with women.

“It’s always a mess, it’s like you’re scared to commit, someone comes along who’s genuine and nice and you get cold feet and leg it.

“Every time you put yourself between two women and never know who to choose, you need to decide what you really want.”

With the news of their affair now in the hands of Jacob, could his resentment against Victoria lead to him telling Meena about the affair?

Will Meena’s jealousy run Victoria out of the village as she threatens her life over the affair with her boyfriend?