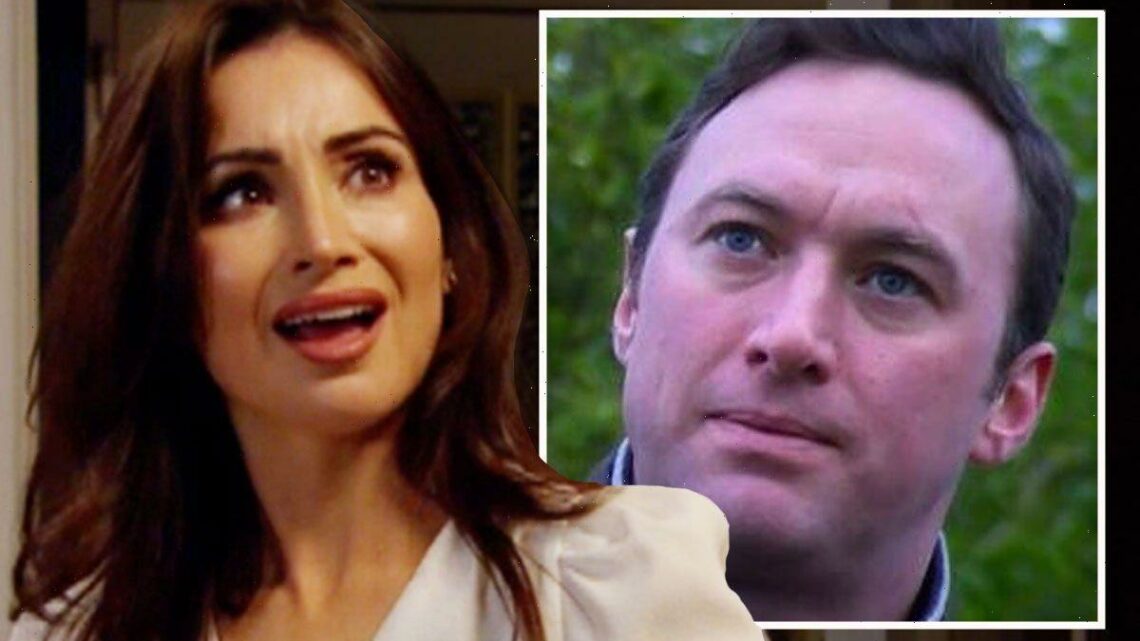 Leyla (played by Roxy Shahidi) has been acting shady for a couple of weeks on Emmerdale and the arrival of newcomer Suzy Merton (Martelle Edinborough) certainly made her more tetchy. Everything has now been explained as it seems she is becoming increasingly addicted to cocaine, something which has helped her get through the stress of the past few months. Liam Cavanagh (Johnny McPherson) saw her in the grips of a high in Thursday’s instalment of the ITV soap, although he didn’t know what was causing her concerning behaviour. However, when she hinted she was no longer happy in her marriage, could Leyla have spent the night with a stranger and had a one-night stand?

The start of the episode saw Leyla and Suzy meet with a potential new client for the Take A Vow business, hoping they would be able to entice him with their deals.

Not only did they manage to lock in two stag dos but they also took on the contract for the wedding, meaning business was going to be booming over the next few months.

Wanting to celebrate, Leyla and Suzy got in the champagne but they also decided they were going to do some lines of cocaine in the office, behind closed doors.

As it seemed Leyla wanted to make the day of getting high, her partner in crime was whisked away when Vanessa Woodfield (Michelle Hardwick) asked her over for a date night.

More interested in her love interest than the drugs, the newcomer took the vet up on her offer, leaving Leyla to return home to her husband.

Although Leyla was on cloud nine, it seemed the doctor was in a more relaxed state of mind as he was looking to turn in for the night.

As his wife poured the drinks, still in the midst of her high, she said: “If you’re worried about messing up the sofa, we can always take this upstairs.”

“What? Now?” he replied, with Leyla replying as she offered him a drink: “Yes, now. I absolutely smashed it out of the park today.”

Not in the mood to celebrate, the doctor explained: “Do you mind if we don’t tonight. It’s just I’ve got work in the morning.”

Annoyed her husband wanted to go to bed, Leyla remarked: “I’ve just told you I’ve pulled off a massive business deal and you’re acting like an 82-year-old.”

My fault for marrying a boring old fart

“I’m just tired. I’ve got a really long day tomorrow and I need to keep a clear head,” the doctor told his wife, who started to turn nasty.

“Yes and I want to have a good night after everything I’ve achieved today,” she said before storming off into the kitchen.

“You’re seriously having a go at me because I don’t want a drink with you at this time?” Liam asked, to which his wife exclaimed: “You know what, forget it.

“It’s my fault for marrying such a boring old fart. Why don’t you make yourself a glass of malt milk and fill up a hot water bottle and all?”

Stunned by his other half, Liam didn’t have it in him to argue and he headed off to bed to get some much-needed shut-eye.

As this was all going on, Suzy’s date with Vanessa was going well as the pair decided to head upstairs with their drinks for some fun.

Still wanting to head into town, although she had no one to go with, Leyla tried her luck by ringing Suzy to see if she was available.

Suzy was clearly occupied and so Leyla ended up leaving a voicemail in which she said: “Save me from Liam. He’s only gone off to flipping bed.

“I just want to go out and have a little bit of fun,” she remarked before the credits began to roll, leaving viewers to wonder what she did.

It could be the villager decided she was going to head into town by herself and get some attention from someone who wanted to celebrate with her.

Meeting a random man, she could have started flirting and before she knew it, they could have ended up in bed together.

With a clear head in the morning, the villager could be mortified to realise she cheated on Liam but she could still feel the same about him being boring.

As she returns home, she could tell her husband she thinks they need to split for a while so they can both see if they still want to be with each other.

Leyla could think this would give her enough time to get the partying and drugs out of her system but she might have bigger fish to fry.

A few weeks after sleeping with the stranger, she could experience symptoms of morning sickness, prompting her to think she is pregnant.

After taking a test, her worst fears could be confirmed as she realises she is expecting the stranger’s child, something she would have never wanted to happen.

Knowing Liam cannot know about her secret, she could tell the doctor they need to split up for good and go their separate ways.

This way, she could leave the village to give birth to the baby and put it up for adoption as she knows she cannot raise it by herself.

Ultimately, this would leave her heartbroken as she would be giving up another child as she allowed her sister to raise Jacob Gallagher (Joe-Warren Plant) as her own.

Will she change her mind and decide she wants to have another chance at motherhood?

In Win for Songwriters, Copyright Royalty Board Set to Approve 32% Increase on Music Mechanical Royalties