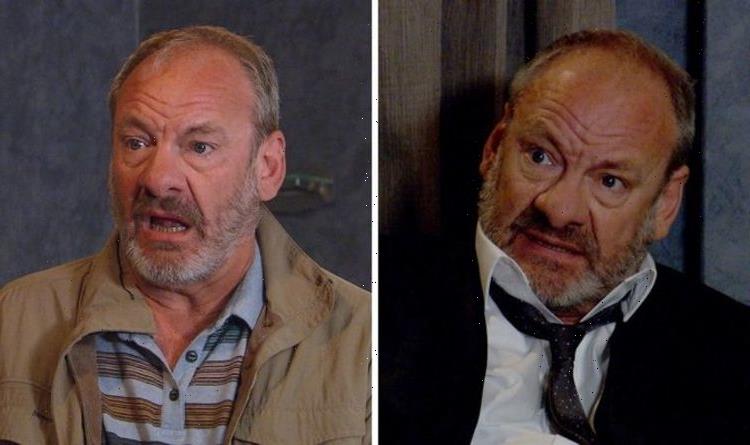 In scenes set to air in next week’s Emmerdale, Jimmy King (played by Nick Miles) will be put in front of a jury for the charges against him following the death of Paul Ashdale (Reece Dinsdale). Jimmy crashed his lorry into the wedding barn which caused the ITV soap villain’s demise. And ever since, he has struck up a friendship with the deceased’s ex-fiancée, Mandy (Lisa Riley). However, Jimmy is certain he will be heading to jail and the actor who plays him, Nick Miles has teased his character’s exit.

Next week, Jimmy is left shaken by his first day in court, despite his wife Nicola King (Nicola Wheeler) thinking everything has gone well.

Speaking about the possibility of Jimmy going to prison, the actor who plays him said: “He believes he has slim to no chance.

“The first day in court goes badly for Jimmy.

“He’s basically terrified and he freezes, and he thinks the jury hates him.”

Nick continued: “He feels terribly guilty about what happened, and he believes he is guilty.

“It’s brought up guilt about death that he thinks he’s caused in the past.”

Speaking about how Jimmy would cope behind bars, Nick admitted: “I don’t know how anyone copes behind bars.

“But Jimmy is a survivor, so I guess he’d bounce back. He’s been shot, stabbed and he’s survived.”

Nick went on to add that Jimmy’s wife, Nicola thinks he has given up on life completely.

“I think he more or less has,” Nick explained. “Nicola knows him more than anyone and I think she’s just about right. He can’t see a way forward from this.”

After Jimmy’s first day in court, Mandy Dingle tries to restore his faith by reading out a speech she has prepared for the judge.

However, Jimmy is quick to misread the signs and leans in for a kiss, which Mandy returns.

Discussing the guilt he feels about his kiss with Mandy, Nick said: “It’s a direct reaction to the speech. He’s completely bowled over by it.

“He feels completely guilty afterwards. He might have feelings for Mandy, but I think we would have feelings at this point to an ice-cream seller who gave him extra sprinkles.

“He’s bowled over by anyone who shows him any act of kindness.”

Nick went on to tease that as a result he and Nicola could split up following his romance with Mandy.

He added: “How often can she take him back? This needs to be a question for Nicola.

“Will she still want him after everything?”

Nick went on to explain how he would feel as an actor if Jimmy and Nicola’s marriage did break down.

“I’d be bereft without a doubt,” he admitted.  “I love working with Nicola.

“It’s been great fun working with Lisa Riley as well, but Jimmy and Nicola have had such a long partnership. I’d definitely miss it. “

Despite his kiss with Mandy, Jimmy is adamant he is heading to prison. But, does that mean he will leave the soap for good?

Everything You Need to Add to Your Baby Registry
Recent Posts