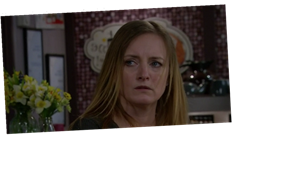 Next week’s Emmerdale will see one character lose their life as a number of storylines on the ITV soap come to a head, and fans are now predicting it could be Nicola King (played by Nicola Wheeler) who dies.

Paul Ashdale (Reece Dinsdale) has been abusing his son Vinny Dingle (John Bradley) for weeks in the Dales, secretly beating him up behind the scenes without his Vinny’s mum Mandy (Lisa Riley) knowing.

Next week will see the couple attempt to get married, but viewers are finally hoping Mandy will discover exactly who the man she’s marrying really is.

And in tonight’s episode, the storyline with Carl King’s birth mother Juliette turned really nasty as it was revealed she had been paying a private investigator to get dirt on Carl’s parents.

Nicola and Jimmy King (Nick Miles) were desperate as they realised Juliette would stop at nothing to take Carl back.

After an argument in the cafe, a heartbroken Jimmy declared: "I’ve messed up," after he took money from Aaron Dingle (Danny Miller) for letting him borrow his van.

Seeing her husband’s sad expression, the cleaner softened: "No it’s her who’s messed everything up."

"Do you think she could actually take him from us?" a nervous Jimmy asked, as Nicola said she thought Juliette would actually try.

But the devoted mum insisted it wouldn’t happen, as she told Jimmy: "There’s only one way she’s gonna manage it.

"It involves stepping over my dead body."

"Horrible line from Nicola there. Hoping it's not her that goes next week! #Emmerdale," one person tweeted.

Another guessed: "Oooooh no does that mean Nicola dies next week? #Emmerdale."

"It’s going to be Nicola! #Emmerdale," a third cried, as another fan speculated it would actually be Liv (Isobel Steele) who dies when Paul kills her.

Others were excited when Vinny finished off the week’s episodes with a tease, as one fan said: "A WEEK WE ARE NEVER GOING TO FORGET OHMYGOD FJRDJSJSJ EXCITED #Emmerdale."