Home » TV and Movies » Escape to the Country guests astonished by ‘surprise’ within property ‘Amazing!’ 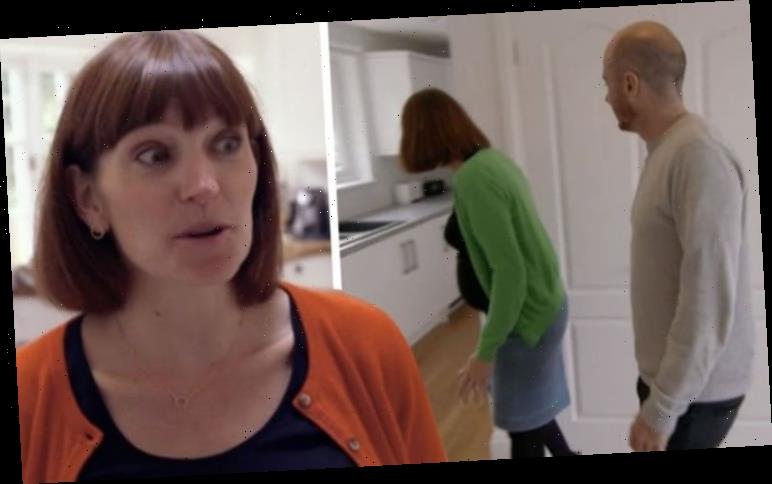 Escape to the Country guests astonished by ‘surprise’ within property ‘Amazing!’

Escape to the Country: Ginny surprises guests with garden annex

Ginny Buckley was in Hampshire today and was on hand to help a young family leave the city and find some tranquillity in the countryside. Escape to the Country viewers saw the property expert tasked with finding Kimberley and Jeremy – who were currently living in a maisonette in Dalston, East London – a property which provided them with both more indoor and outdoor space all for a budget of £800,000. As for the criteria they had, “stylistically they were quite open” as they were more focused on “the way they would use the space as a family”. Four bedrooms or more were required, as well as an office for Kimberly to work from home while a local community was also on the checklist for the couple. When Ginny took the couple to see the Mystery House, there was a surprise in store for them.

Kicking off the property search, Ginny took the couple to the South Downs national park, on the county border with West Sussex, to a village called Rake.

Once a village pub, the Grade II listed property was converted into a substantial family home just four years ago.

Stepping into the living room, Kimberley commented: “Oh wow! This is amazing. This is such a beautiful room – look at that log burner! This is exactly what we are looking for.”

Jeremy described the open-plan space as having “three living rooms” within it.

The kitchen also blew the couple away as it offered vaulted ceilings and a modern interior.

There was also a playroom downstairs which could be used as an office, a cloakroom and the first of four bedrooms which had its own en-suite.

Upstairs were three bedrooms and a family bathroom – including the master bedroom which had an en-suite. 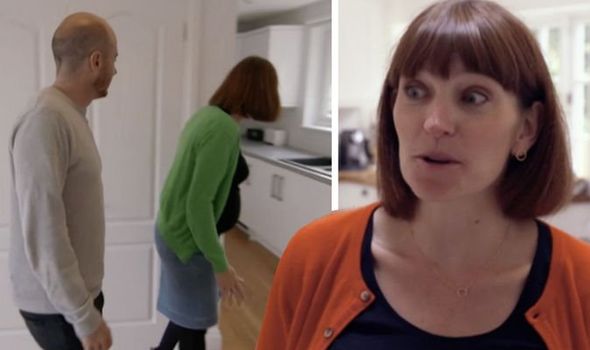 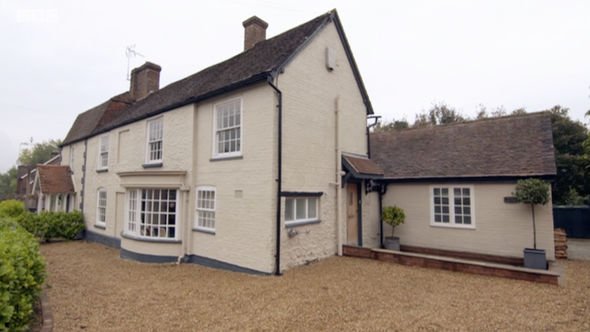 As for the outside space, despite it being on a busy main road, the rear garden – which consisted of a sun terrace and lawn – was sheltered by mature trees.

On the road, Jeremy said: “We live right next to a main road in central London, so anything compared to that is going to be quieter. It’s not silent, but I think there’s a conversation to be had about whether that’s a suitable comprise considering how fantastic this house is.”

The second property Ginny showed was in the market town of Haslemere, Surrey.

It was another Grade II stone and brick cottage, which dated back to the 17th century in parts and brimmed with period charm throughout.

As for what the couple thought of the property when they stepped inside, the words “adorable” and “sweet” were thrown around.

The kitchen was right and airy, and tastefully designed, albeit much smaller than the kitchen in the first house. 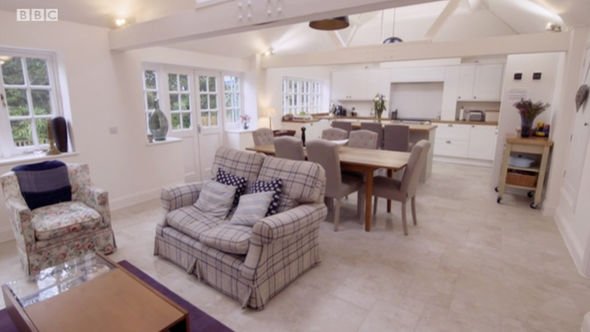 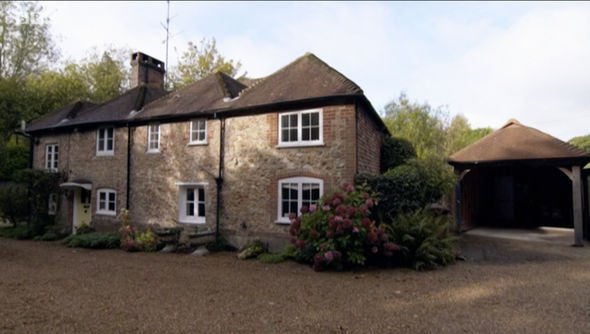 “I’m sensing Kimberley, you are warming to this a little bit more than Jeremy,” Ginny commented.

“I think it’s a really beautiful place but it’s a different approach to what I had in my mind,” the guest explained.

Upstairs were four bedrooms and a family bathroom.

Outside, there was a pretty enclosed courtyard, and then a large lawn with mature trees and a summerhouse.

As for how much it was priced at, for £675,000 Kimberley and Jeremy could buy it – and the price tag shocked them.

“It’s an interesting option for you, plenty of money left in the budget if you did want to make alterations to suit your family,” Ginny commented.

The Mystery House was back in Hampshire, further towards to coast in Horndean and Ginny thought it would challenge the couple on both location and style.

“I can only describe it as an extravaganza from the 1970s,” the presenter said. “Tons of living space, I think you will probably fit your London flat into it several times over! What do you think?” 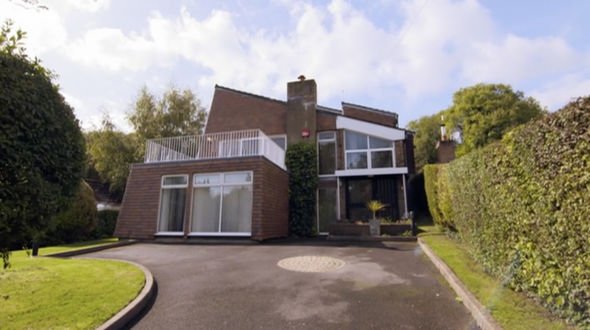 “It’s bonkers but I really like it,” Kimberley replied. “It’s got massive windows, loads of light.”

Jeremy added: “I think it’s a lot of fun, a really cool building. It’s very much in line with a lot of places we have been looking at to be honest.”

Ginny explained how the house had been “extended in 1990 and updated over the years, the property’s striking external style is mirrored by the interview design”.

The tour started on the upper ground floor and Ginny questioned: “What do you think of the style? I know you’ve been open to style, all along you’ve been quite relaxed about that.”

“I think this is really cool,” Kimberley commented. “I love the amount of space here. These beams are totally different to the kind of beams we’ve seen before, but it really works in this room and I feel like I’m in a 70s Bond film!”

A few steps down from the vaulted sitting room was where the dining room, which led to a study overlooking the sun terrace.

Across the hallway, there was a cloakroom and the modern kitchen which had a conservatory attached and Ginny described it as “big and bold”. 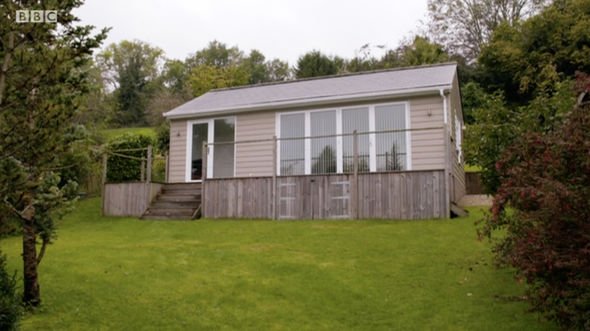 “This is such a massive kitchen!” Kimberley remarked.

There were five bedrooms, scattered across its three floors, on the lower ground floor were two bedrooms which overlooked the garden with wall to wall windows, also on that floor was a bedroom in use as a music room and a family bathroom.

Upon the first floor lay a trio of rooms, the largest of which was earmarked as the master suite.

“This is quite something,” Jeremy said: ”This is a whole suite like you say! There are two rooms [walk in wardrobes] before you get in the bedroom!”

When asked if they could imagine themselves living in the house, the couple said they “loved the bedroom” and the “sense of space” throughout the whole house which fitting with what they were looking for.

“The space hasn’t stopped yet, there is more to tell you. If we wander outside to the garden, we’ve got a surprise to tell you,” the presenter teased.

In a secluded part of the garden, up some steps and past a decked area was the “surprise” – a self-contained annexe.

At the end of the tour, Kimberley commented: “The Mystery House from the outside is quite striking, I would definitely consider this, this style of house gives you so much for your money, it would be really stupid to discount it because it looks a bit different – actually I quite like that, it draws me to it if anything.”

“The size of the house is great, the garden is enormous,” Jeremy added. “But in reality, the commute from this part of the UK all the way to London is too much for me. I would have to look at staying in London or working from home which isn’t on the cards at the moment – so this isn’t a realistic option.”

As for the end result, the couple were surprisingly interested in property number one and wanted to look around the local area to see whether it was a perfect fit for their family.

Escape to the Country airs weekdays at 3pm on BBC One.

Brooke Baldwin on How Writing Her New Book, Huddle, Influenced Her Decision to Leave CNN