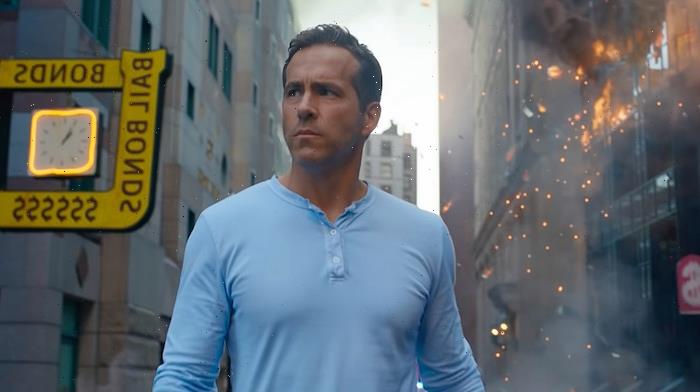 Free Guy is a frustrating contradiction: a movie that manages to be a happy surprise, yet utterly underwhelming.

Launching its audience into the chaos of an open-world video game, Free Guy is filled to the brim with humor, violence, and romance for a jam-packed two hours that feel shockingly hollow by the time the credits roll. It’s loudly self-aware, but drowning in cliches. Undeniably fun but with nothing interesting to say. How Free Guy manages to do so much at once yet nothing at all is its biggest contradiction. But most irritating is that, despite its many glaring flaws, it’s all too easy to like Free Guy: an entertaining, charming, and thunderously applauded crowdpleaser.

Fittingly, the film’s protagonist Guy (Ryan Reynolds) is a walking contradiction himself. The buttoned-down, blue-shirt-wearing bank teller is revealed to be an NPC (Non-Playable Character) in the video game world of Free City.

The title of this article says it all, but just in case you didn’t think we meant it, this is a spoiler review of Free Guy. You’ve been warned.

His journey is in the name of free will, as Guy seeks control over his life but realizes that, in order to succeed, he’ll need to accept the confines of his reality being a game. Difficult as it is to come to terms with that truth, it ultimately frees him, and once he shares the revelation with those around him, Guy frees his entire world.

Of course, when we first meet Guy, he doesn’t seem capable of freeing anything. As we go through the motions of his daily routine, he proves to be the most passive character alive. Guy wakes up, greets his goldfish, gets his predetermined coffee order, and heads to work with his best bud, Buddy (Lil Rel Howery). At the bank, they lay on the ground for some routine robberies, then continue their daily tradition of heading to the beach to sip beers. Thankfully, Guy’s world is thrown off track by the introduction of Moltov Girl (Jodie Comer), a sunglasses-wearing badass who also doubles as the woman of his dreams.

Just the sight of her is enough to kickstart Guy’s new life: he’s emboldened to order a cappuccino in lieu of his usual medium coffee. And no, there’s nothing bold about a cappuccino, but Guy ups the stakes by stopping a bank robbery and stealing the very sunglasses that reveal the truth of his world — it’s all just a game.

Guy learns to play the “game” of his world so well that he levels up and becomes an internet phenomenon. Blue Shirt Guy plays the GTA-inspired shooter as a good guy, so of course, he’s easy to love. But despite becoming a master of the game, Guy doesn’t understand that his world amounts to zeroes and ones until his beloved Moltov Girl aka Millie is forced to tell the truth: she’s the creator behind his code, searching for proof that Free City’s owner, Antwan (Taika Waititi) is a dirty, code-stealing liar.

Guy is her proof, an NPC that evolved to the point of believing he’s a real person. He broke off course to create his own destiny and even winds up inspiring the same in the many characters around him. The revelation is world-shattering and just enough to break Guy’s optimistic resolve. But only briefly, of course.

When Ryan Reynolds is on the poster, we know exactly what to expect. Free Guy is no exception, capitalizing on his charm, wit, and very distinct personality that most of his characters seem to share. It even finds a way to go the extra mile, milking sincerity from an actor that’s become the poster child for cynicism. His best moment is when he abandons the glasses to wallow in the pain of the truth before he quickly takes solace in Buddy’s insight. The friends decide that if their experiences are real and above all, if their bond is real, then so are they.

But how real is their bond, anyway? This is their most heartfelt moment, and up until this point, Guy’s most meaningful relationship was with Millie, a player he just met. The movie goes all in on the idea of stepping out of your comfort zone and taking control of your life, and this scene contends that you should have people at your side when you do. But Buddy and even Guy are pretty hollow and their relationship even thinner. Beyond a moment of sincere emotion from Reynolds, Guy is just a shadow of the many characters he’s played.

They keep our attention because they’re Ryan Reynolds and Lil Rel Howery, funny people who are magnetic performers. But beneath that, there’s not much more to them.

This isn’t our first hint that Free Guy is lacking in-depth, but it is one of the clearest.

A Love Letter to Millie

Free Guy touts two relationships as the heart of the film: Guy and Buddy, and Millie and Keys (Joe Keery). Most time is spent building a doomed-from-the-start romance between Guy and Millie, destined for failure because they literally exist in separate worlds. So in the end, when Guy and Buddy embrace we should celebrate that there’s still a meaningful relationship in Guy’s life. As for Millie, she has Keys.

The realization that Keys channeled his love for Millie into Guy’s coding certainly wasn’t subtle, but it was very sweet. The tell-tale coffee order and their shared favorite song were big signs, but Keys’ pining was its own billboard. Keery and Comer have wonderful chemistry and the setup for their romance is very sweet. But the bubble of joy is popped by the bumbled reveal.

When all is said and done, the villainous Antwan defeated, Millie still hasn’t put the pieces together. Instead, she comes to a slow realization for the romance that’s been telegraphed from the start. Then she dramatically runs to find Keys in the streets of New York, stares at him for what feels like an eternity, before they meet for a kiss in the middle of the street. The moment is so long, awkward, and ripe for parody that I half expected them to be hit by a car. For a movie that revels in being self-aware, Free Guy is annoyingly oblivious to its most cliche moment.

And this is the heart of the movie’s problem. It has the outline of something cute and clever but doubles down on fun at the expense of everything else. Stepping out of your comfort zone is a great message for a movie, but only if it manages to accomplish the same in its craft. But Free Guy never really does, unable to move beyond the cliches and actually delve into something authentic.

Perhaps the most frustrating thing about Free Guy is how quickly I gave into it. In the film’s climax, Guy faces off against an “upgraded” version of himself — the muscular but incomplete Dude. His counterpart may lack brains and heart, but his strength is enough to crush our plucky hero with his bare hands. So how could Guy possibly stand a chance?

Where this could be an opportunity to showcase the core of his character, Guy’s survival ultimately hinges on the fact that Disney acquired the film just in time to cram as many references as possible into its final moments. Caught up in all the doors opened by their new owners, the filmmakers opt to have Guy whip out a lightsaber, Captain America’s shield, and a literal Hulk arm. Because why the hell not?

As a result, the movie becomes oddly cynical in its final moments. To its credit, the theater went wild when the Avengers theme started blasting and I myself shot up like a rocket when Chris Evans appeared onscreen. How could I not squeal in delight at my favorite Avenger? It’s your classic movie theater moment: we all get the reference and feel the instant gratification of being excited together.

But the disappointing truth is that this charming original story decides it needs IP to sustain itself. The cheer for Cap’s shield was the loudest reaction my theater gave and undoubtedly the most excitement I felt throughout the movie.

It’s especially odd given Antwan’s villain monologue was all about people needing sequels and IP to stay interested. He isn’t rewarded for this perspective — the film punishes him, with sales for Free City 2 apparently tanking. Meanwhile, Mille and Keys’ Free Life is a sleeper hit, with more players than they can handle. So Free Guy is certainly aware that there’s value in the new, being an original story itself. But it also decides that it would crumble without the familiar, taking from Disney’s newer roster in its most climactic moments.

And it works: we’re entertained, aren’t we? When it uses the reliable comedy of a Ryan Reynolds character and the staples of a cliche romance, we’re charmed!

IP and familiarity become a solid foundation for the movie, but it still buckles under the weight of its overwhelming blandness. The romance feels inauthentic and the characters feel hollow, as does the world. Keys and Millie’s original game might win in the end, but Free Guy isn’t willing to bet on them. So originality is shelved for the violent, hollow action of Free City in their world, and Free Guy in ours.

Vitamin B12 deficiency symptoms: Three troubling signs on the toilet indicative of low B12