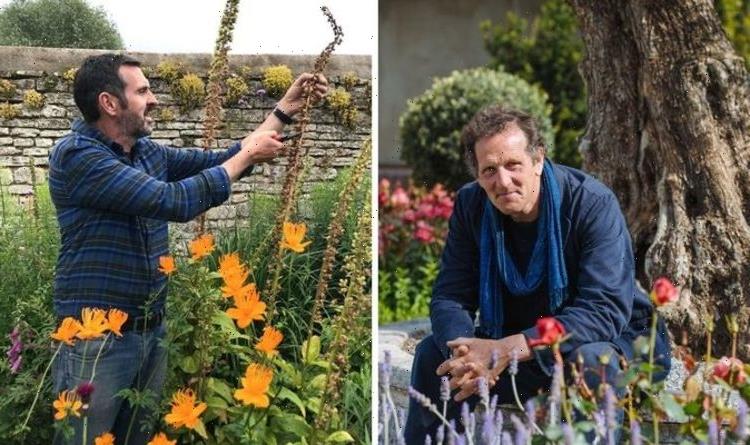 The popular series usually airs on BBC Two at 9pm on Fridays and sees Monty Don and other green-fingered gurus share advice and tips to enable people to get the most out of their outdoor spaces. Eager fans tune in to see the latest from the best horticulturalists and enthusiasts in the industry but several have been left disappointed by the TV guide restructure.

Instead of taking its usual Friday evening spot, Golf: The Open Highlights will be replacing Gardeners’ World.

But fans don’t have to face a completely Monty-free Friday, with Monty Don’s Japanese Gardens airing at 7pm on the same channel.

This instalment will see Monty, 66, exploring rooftop gardens in Japan and taking lessons in the art of bonsai.

Fortunately, Gardeners’ World will be back in its usual scheduled slot next week.

It read: “As you saw on #GardenersWorld last week, Derek Heathcote knows a thing or two about sweet peas! How have yours been this year? We’d love to see your pics #FlowersOnFriday #GYO.”

Many responded with photos of their own attempts, and comments thanked the experts of the show for their advice.

But loyal viewers have been left frustrated that their usual Gardeners’ World fix won’t be available.

Hours before the usual schedule, one fan took to Twitter to say: “No #GardenersWorld tonight sadly, but loving my first dahlia flowering from my free @GWmag seeds. A mini sunshine.”

Another wrote: Dear @BBCTwo and @GWandShows, on weeks when #GardenersWorld isn’t on, it would be absolutely amazeballs if you could broadcast some old old episodes, like with Geoff Hamilton etc. Huge thanks in advance! #shoutyhalfhour.”

A fourth penned: “no gardeners world tonight?” with a sad face emoji.

Another echoed: “Why can’t they just leave gardeners world alone.. we don’t get much gardening on tv so enjoy what we are allowed. I won’t be watching the golf.”

“Sleep inducing golf instead of Gardeners World. BBC needs to realise not everyone wants sport inflicted on them. Time they stopped interfering with scheduling,” someone else commented.

A different fan mirrored this complaint, writing: “I would rather watch Gardeners World than crap Golf. Shame on BBC for taking off the best program on the BBC.”

Another asked: “There’s BBC1 BBC2 BBC4 onlineBBC3 BBCiplayer various red button channels and the golf has to be on instead of Gardeners World ?”

Monty himself addressed the shake-up on Wednesday, Tweeting: “There may be no Gardeners’ World this week – courtesy of golf – but just completed filming next week’s show and it will be well worth the wait.

“And there is another chance to see Japanese Gardens tomorrow and Friday evening at 7pm.”

Gardeners’ World returns to BBC Two next Friday at 8pm.