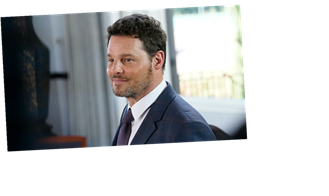 Goodbye, Alex Karev: How 'Grey's' Gave Him a Shocking Ending

Grey’s Anatomy finally wrapped up Alex Karev’s story after weeks of build-up — and it all came to a gut-wrenching conclusion in a special farewell-themed episode.

Following Justin Chambers‘ abrupt exit, Grey’s addressed the elephant in the room and answered the biggest question on everyone’s minds in Thursday’s emotional, nostalgia-filled hour, titled “Leave a Light On.” The truth, it turned out, was absolutely stunning and reunited him with a character we haven’t heard from in over a decade, his former flame Izzie Stevens(!). Yeah, color us shocked.

In personal letters addressed to Meredith, Jo, Webber and Bailey, Alex explained why he wasn’t returning to Seattle, revealing that he was happily together with Izzie and that they were raising their two 5-year-old twins(!) on a farm with horses in Kansas(!). Alex revealed that he reconnected with Izzie, whom he married shortly after she was diagnosed with cancer, in the weeks leading up to Meredith’s trial seeking her medical license to be reinstated. It was during that process that he chose to reach out to Izzie because he wanted to know if she was alive, OK and willing to be there in person for Meredith’s trial.

“I want to say I wanted to call her for you,” Alex reveals in his letter to Meredith. “The truth is… I wanted to know if she was alive and well. I wanted to hear her voice.” When Izzie answered the phone, Alex writes, it was like no time had passed. During the call, Alex heard two young voices in the background. It was then he discovered that Izzie had taken the embryos they had frozen during her cancer treatment and moved forward with IVF five to six years earlier and that they were his kids. And that they were in first grade. “She had our kids,” he tells Meredith. “I love Jo deeply, still. I think I always will. And if it was just about two women I love, I’d choose my wife. But it’s not just her…”

In Alex’s letter to Jo, he apologized for leaving her for Izzie, attempting to reassure her that he still loved her and that she deserved better. But, and here’s the kicker, “I’m in love with Izzie,” Alex writes. “It felt like no time had passed, like Izzie and I were frozen together in time.” Later, Alex reveals that he’s moved forward and signed divorce papers and left everything to Jo, including his shares in Grey Sloan, leaving his stunned ex-wife to pick up the pieces.

It was a heartbreaking farewell to one of the last remaining original Grey’s doctors, as Chambers did not return to film new footage for his goodbye episode; instead, ET can confirm that he provided voiceovers as he read Alex’s personal letters to Meredith, Jo, Webber and Bailey. Showrunner Krista Vernoff said in a statement to ET after Thursday’s episode, “We will miss him terribly.”

After telling everyone he had to leave Seattle to care for his ailing mother in Iowa, Alex’s wife, Jo, dropped the stunning bombshell in last week’s episode that Alex had been lying all this time about his true whereabouts and began to come to terms with the possibility that he had abandoned her without so much as a goodbye. “He left me. I think he did,” Jo tearfully told her friend, Link. “I think he woke up one day and felt the need to escape his life and me. I called his mom. He wasn’t there. He had never been there.” In the same episode, Meredith expressed suspicions over where Alex had actually been.

When news of Chambers’ departure broke earlier this year, Alex — who had been fired from Grey Sloan at the end of season 15 for being complicit in Meredith’s insurance fraud — was serving as chief of surgery at rival Seattle hospital Pacific Northwest General Hospital (Pac-North), alongside ex-Grey Sloan docs Owen and Webber. He had successfully recruited Maggie to be the hospital’s head of cardiothoracic surgery, but when Catherine decided to buy and absorb Pac-North, it effectively neutered their staff and forced them all to return to Grey Sloan.

Since Alex’s unexpected absence, Jo had been struggling with the mysterious circumstances surrounding her husband’s sudden radio silence, confiding in Amelia at one point that Alex had stopped returning her phone calls and was “going through something” serious, needing time to figure stuff out. Meredith, who deemed Alex her “person” after Cristina left for a job in Switzerland years earlier, had also attempted to maintain contact with her friend over unreturned voicemails and text messages. It appears that time for Alex to figure out where he stood in his life finally came.

Vernoff addressed Chambers’ sudden departure for the first time in a February interview, promising fans that there would be “clarity” when it comes to how the beloved character would be written off. “It was a very careful threading of a needle, where we are giving a little bit of information and pain to Jo,” she said. “We’re, episode by episode, illuminating the story of where Alex is. And it takes us quite a few more episodes to get there and to give the audience clarity.”

In a shocking move, Chambers announced in January that he was leaving Grey’s after playing Alex for more than 15 seasons, citing a desire to “diversify [his] acting roles.” The series’ 350th episode, which aired Nov. 14, was Chambers’ last appearance on the show.

“There’s no good time to say goodbye to a show and character that’s defined so much of my life for the past 15 years,” the actor said in a statement to ET. “For some time now, however, I have hoped to diversify my acting roles and career choices. And, as I turn 50 and am blessed with my remarkable, supportive wife and five wonderful children, now is that time.”

“As I move on from Grey’s Anatomy, I want to thank the ABC family, Shonda Rhimes, original cast members Ellen Pompeo, Chandra Wilson and James Pickens [Jr.], and the rest of the amazing cast and crew, both past and present, and, of course, the fans for an extraordinary ride,” Chambers added.

Chambers’ sudden exit prompted Pompeo to briefly react to the news one day after it broke. Responding to a tweet by Vanity Fair that read, “#GreysAnatomy is about to feel one of its biggest losses yet,” the 50-year-old actress and executive producer couldn’t help but share her thoughts on the situation.

“Truer words have never been spoken,” Pompeo tweeted, alongside a brokenhearted emoji, conveying her emotions over losing one of the Grey’s OGs.

Relive Alex’s most memorable moments on Grey’s in the retrospective video below.

This Top-Rated Keto Product Could Help Your Weight Loss Journey