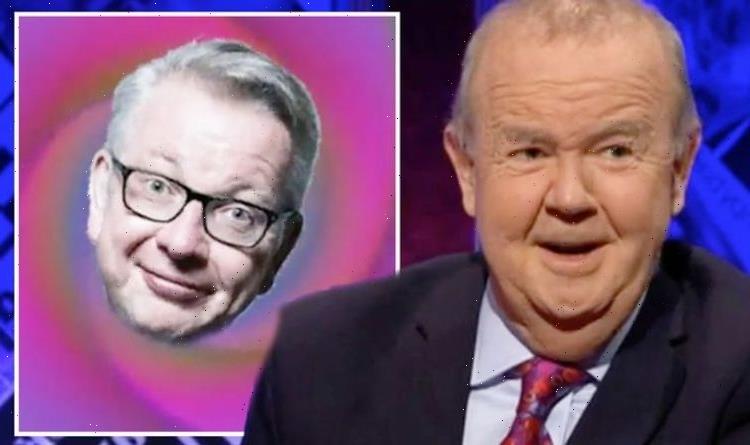 Ian Hislop and Paul Merton returned as part of the Have I Got News For You special on New Year’s Eve. Have I Got 2021 News For You gave BBC viewers a chance to look back at the comedians and their many guests’ merciless mocking of some of the biggest headlines to hit the news this past year.

And, inevitably, the compilation of this year’s best bits put the government and politicians in the firing line, with many of the highlights showing Ian and Paul rip into the likes of Boris Johnson and Sir Keir Starmer.

But while the compilation format was a change to the show’s usual way of things, the title sequence had also been overhauled.

Typically made up of illustrations and animations poking fun at the news, the HIGNFY 2021 special simply showed Housing Minister Michael Gove dancing at a party.

And to poke fun further, the HIGNFY theme music had been revamped to a techno style beat.

As clips of Mr Gove dancing played out on-screen to the dance-themed HIGNFY tune, Mr Johnson was also incorporated.

Mr Johnson popped up on-screen to say the word “good” three times in time with the beat.

As the sequence continued, emojis and brightly coloured effects were then used to mock the party atmosphere where Mr Gove was dancing.

Raucous laughter could be heard from the BBC audience as the title sequence then drew to a close.

And it appeared those watching at home also saw the funny side of the montage.

Jess Hillier weighed in: “Whomever did the intro for #hignfy intro for #2021 … You’re a GENIUS.”

While @ModerateUK added: “Thank you @haveigotnews for that intro. ‘Made’ this s**t year for me! Top marks!”

When the show began, a number of the year’s best-known stories soon took centre stage.

Elsewhere, fans got to see an unaired clip of Jo Brand mixing up her cards in a blooper.

And the distribution of government contracts by Matt Hancock also came under scrutiny.

Have I Got 2021 News For You is available to stream on BBC iPlayer now.