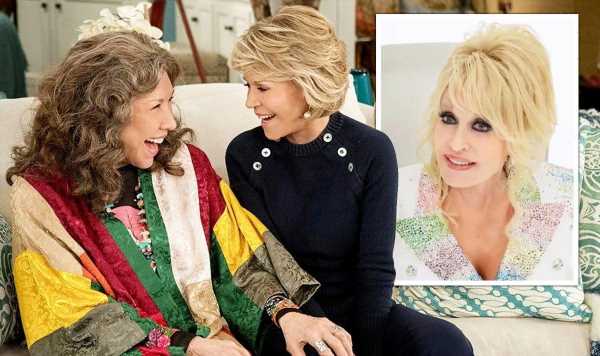 Dolly Parton has finally reunited with her 9 to 5 co-stars Jane Fonda and Lily Tomlin in the last ever episode of Netflix’s hit senior comedy, Grace and Frankie. After several years of fans begging the series to make it happen, Express.co.uk spoke to cinematographer for the series Luke Miller about making their dreams come true.

Key crew member Luke revealed to Express.co.uk why Dolly’s often demanded Grace and Frankie cameo was left until the very end of the series.

Over thirty years after starring together in the hit 1980 comedy film 9 to 5, Jane and Lily reunited for the popular series about two older women who discover their husbands have been having an affair.

Grace (played by Jane Fonda) and Frankie (Lily Tomlin) have become best friends over the Netflix sitcom’s past seven seasons, and viewers have been clamouring for their former co-star to take on a guest role since it began in 2015.

“People have been talking about getting Dolly in the show since the first season, I think,” Luke explained.

“I think after the first season came out, it was sort of like, ‘Cool. When’s Dolly going to be in it?’”

Dolly’s appearance was a no-brainer for fans of Grace and Frankie and 9 to 5, but Luke revealed it took some time for the show’s producers to make it work.

In addition to releasing new music and touring up to the 2020s, Dolly has continued to guest star in films and television series, so it was only a matter of time before she shared the screen with Jane and Lily.

“I know that the producers and Jane and Lily were looking for a way to involve her over the years,” Luke continued.

“And, I guess it never either worked with scheduling or felt right with the right characters. They got to this character Dolly played and thought, ‘Well, that’s just perfect for Dolly.’”

In the final episode, Frankie is worried about a premonition of her death day, and stages a fake funeral for her family and friends to attend.

Grace accidentally becomes her killer after a mishap with some electrical cables, and they end up paying a brief visit to heaven before tricking a secretary, played by none other than their 9 to 5 co-star, into giving them a second chance on Earth.

In the classic comedy caper, Dolly portrays a secretary who teams up with Jane and Lily’s office workers to take down their sexist boss, Frank Hart (Dabney Coleman), before their schemes take a number of disastrous turns.

“Not only is it perfect for Dolly,” Luke went on. “But when she’s sitting at a desk like that, it really harkens to 9 to 5, because you’ve got three women standing round an office desk.

“It took a long time to get there, but I think it was the right answer ultimately when it happened.”

Dolly’s cameo in the series was confirmed late last year, but fans were finally able to see the three actresses reunite now the last episodes of Grace and Frankie have been released.

The cinematographer added: “I think everyone’s going to really enjoy it. The other thing that will happen… I think ending a series people love is probably the hardest thing television writers have to do.”

“I think they did a great job. It’s an impossible task, ‘Can you please end this thing people like to have?’

“And so I think people will be talking about Dolly, and I hope they’ll be saying they’re happy with the ending.”

Jane and Lily saying goodbye to their iconic characters will be a bittersweet watch for long-term fans, but they can rest assured this won’t be the last time the two screen legends will be working together.

Grace and Frankie seasons 1-7 are available to stream on Netflix.