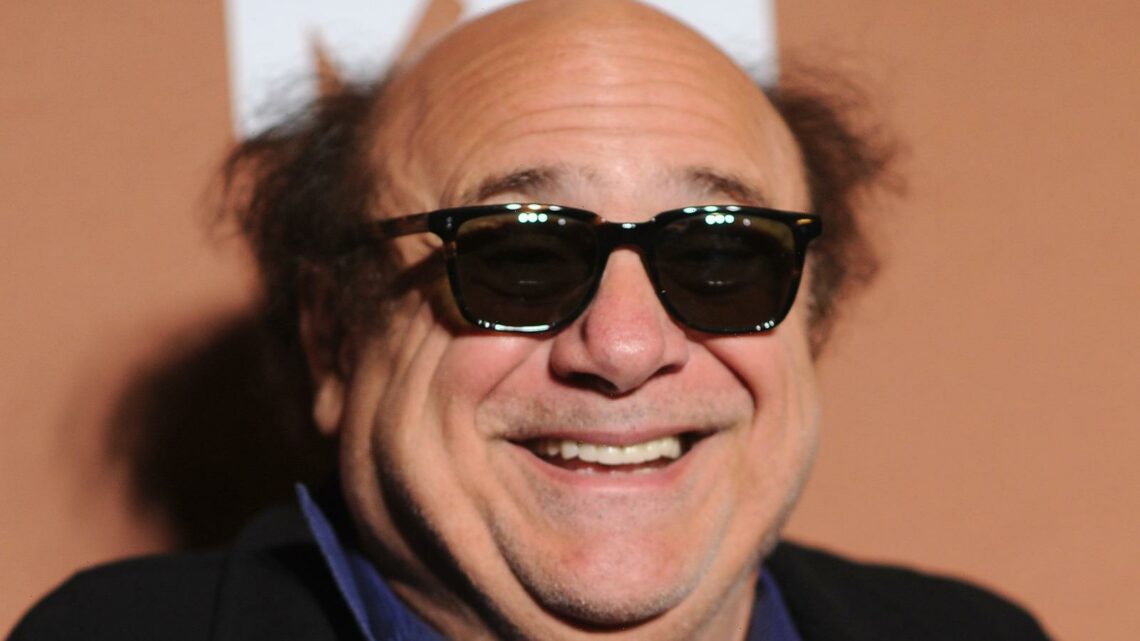 The following article includes mentions of drug and alcohol use.

Pretty much everyone can agree on Danny DeVito. There’s just something about the highly-recognizable actor that makes him extremely likable, even if he’s playing a less-than-savory individual on screen. And that’s usually who DeVito portrays, such as The Penguin in “Batman Returns,” or a would-be murderer in “Throw Momma from the Train.” He’s particularly made an impression on television, playing the utterly nasty but secretly vulnerable dispatcher Louis DePalma on “Taxi,” or Frank Reynolds — probably the most selfish and detestable character in TV history — on “It’s Always Sunny in Philadelphia.” Then again, DeVito is also a familiar and comforting enough presence that he’s been a common figure in kids’ movies, including “Matilda,” “The Lorax,” and the “Jumanji” series.

In spite of all the joy he exudes and brings to TV and movies, DeVito has lived a life that’s been touched by tragedy, sorrow, and heartbreak. Here are all the times when things weren’t so funny for the comic whirlwind that is Danny DeVito.

Danny DeVito was born with a chronic health condition

Certainly the most talked-about physical attribute of Danny DeVito is his stature — he’s one of the most noticeably slight actors in Hollywood, standing around 60 inches tall. “On a really good day, I’m five feet short,” he once said (via CelebHeights). “It’s pretty difficult for me to play anything but the little guy.”

But the reason behind DeVito’s height is medical. According to Yahoo! News, the beloved actor was born with Fairbank’s disease, also known as multiple epiphyseal dysplasia or MED. The National Institutes of Health characterize the condition as a musculoskeletal disease, which affects and inhibits the development of growth of bone and cartilage. In addition to below-average adult height, people with MED are also more likely to suffer from early-onset arthritis, pain in the joints (particularly in the knees and hips), curvature of the spine, and difficulty walking.

According to a Rolling Stone profile, DeVito was never teased or bullied over his height while growing up, and although it has limited the variety of roles available to him, he thinks it was more of a help than a hindrance when he was first auditioning. “Because I wasn’t so average. Early on, when I’d go in for a part, people would go, ‘Oh,'” he told The Guardian in 2012. “I got two Shakespeare parts like that.”

He was raised by an alcoholic father in a rough town

When Danny DeVito was born in 1944, it was into an already sizable family from Asbury Park, New Jersey, coping with challenges both common and unique, per Biography. DeVito’s mother: Julia DeVito, 40 years old at the time of his birth, and the parent of two teenage daughters. In other words, Danny’s arrival was something of a surprise. “I didn’t want him, but I’m so proud of him,” she bluntly but honestly told Rolling Stone in 2015.

Meanwhile, Danny DeVito’s father, Daniel DeVito, Sr., bopped around different low-to-moderately paying jobs to support the family, including operating a candy store, a dry cleaners, and a pool hall. The elder DeVito also dealt with alcoholism, which made for a fraught family dynamic. “My father had a drinking problem and was sick in that way,” the actor said. “And my father was a sweet man during the day. But as soon as he had a drink, he went off the deep end. I felt vulnerable.”

His father’s alcohol addiction was only partially what led Danny DeVito to leave home at 14, when he convinced his parents to send him off to boarding school. That way, he could escape heroin, which had been encroaching into Asbury Park in the late 1950s and ensnaring some of DeVito’s friends. There were other temptations, too. “What we were doing in those days were stolen pharmaceuticals,” he explained to The Guardian. “One of my good friends wound up dying in prison. It wasn’t an uncommon thing.”

Danny DeVito landed his first major film role in the 1975 Jack Nicholson-starring adaptation of Ken Kesey’s mental hospital-set novel, “One Flew Over the Cuckoo’s Nest.” DeVito actually reprised the role of Anthony Martini, which he originated in the story’s off-Broadway production — so it was a part he held close to his heart, and one for which he was willing to put himself through a series of exhausting and painful challenges.

To prepare for (and be respectful of) the role of a mentally ill man who endures frightening hallucinations, DeVito spent time observing the residents of a facility on New York’s Wards Island. “I was pulling bits from them, stuff that wasn’t in the book,” he told the New York Post in 2017. “And Martini was shot down into the sea during World War II, so I always pictured the water rising in the room. That’s why I always sat on my legs in the chair — ’cause in his mind, the water’s rising.”

“One Flew Over the Cuckoo’s Nest” was shot at the Oregon State Hospital, with the institution’s director, Dr. Dean R. Brooks, playing the fictional administrator, Dr. Spivey. During production, DeVito suffered a mental health episode, developing such severe separation anxiety from his then-girlfriend, Rhea Perlman, that he came up with an imaginary friend to keep himself company. According to the Independent, DeVito sought out and received treatment from Dr. Brooks.

If you or someone you know is struggling with mental health, please contact the Crisis Text Line by texting HOME to 741741, call the National Alliance on Mental Illness helpline at 1-800-950-NAMI (6264), or visit the National Institute of Mental Health website.

Danny DeVito has had some scary on-set experiences

Danny DeVito just wants to act — and to do so in peace and without threat to life or limb. But that’s apparently too big of a request for the universe to grant, because he’s been injured or came face-to-face with death during production more than once.

When DeVito portrayed The Penguin in 1992’s “Batman Returns,” one scene called for a monkey to deliver a note to him from Batman. The actor, in full Penguin costume, upset the monkey. “He takes one look at me, and leaps at my balls,” DeVito recalled of the “horrifying experience” on “The Graham Norton Show.” He remembers the monkey latching on to his leg with his teeth, and that it took an animal trainer to pry it off. Fortunately for DeVito, his costume was well padded, and he “did not feel a thing” besides panic.

Decades later, a 2016 episode of “It’s Always Sunny in Philadelphia” included an underwater sequence, where the show’s main characters are about to drown to death. “Danny’s incredibly buoyant,” co-star Charlie Day revealed on “Conan.” “… We really had to weigh him down to get the shot.” After the director yelled cut, four of the actors easily popped back up for air, but not DeVito. “Because we weighed him down, he sort of got halfway and was going nowhere,” Day continued. “And [he had] that look of panic in his eyes of like, ‘This is the end, these guys killed me.'” Fortunately, a safety diver jumped into action and pulled DeVito out of the water.

In 2006, Danny DeVito appeared on “The View” to promote “Deck the Halls,” but the most memorable takeaway from the interview was that DeVito was drunk — he’d admittedly been out with pal George Clooney chugging limoncello the night before and hadn’t sobered up yet. According to the South Florida Sun-Sentinel, that led to DeVito launching his own limoncello brand, with the booze naturally leading the actor into the restaurant business. He’d met Florida restaurant businessman David Manero, and with a third partner, they opened DeVito South Beach in Miami — after spending $7.5 million to renovate a building and creating an expensive menu to generate an average ticket of $75 per person.

DeVito liked to show up at the restaurant and greet customers, but by 2010, the venture was in deep trouble. When Manero couldn’t repay the hefty loans incurred over DeVito South Beach, he unloaded his ownership over other restaurants in his portfolio, per The Palm Beach Post. That same year, employees sued the restaurant’s management, alleging they were getting stiffed on paychecks and their cut of tips. According to the Miami New Times, a server snuck onto the eater’s computers and reportedly found proof of the slight.

DeVito, and DeVito South Beach, also faced code violations from Florida health inspectors, per NBC Miami. The actor ultimately cut his losses and bailed, splitting from his business partners and leaving a restaurant that shut down for good in 2011.

With all of the other drama and hardship he’s experienced, it seemed like Danny DeVito at least had a rock-solid relationship upon which he could count as the foundation of his life. According to HuffPost, DeVito began a relationship in 1970 with fellow actor Rhea Perlman (best known for her Emmy-winning stint on “Cheers,” and for costarring with DeVito in “Matilda”). 12 years later, the pair got hitched (via Radar) and eventually had three kids together.

As one of the longest-lasting dual celebrity marriages in notoriously flaky Hollywood, it sadly still didn’t last forever: In 2012, after more than 40 years together as a couple, DeVito and Perlman romantically separated. The next year, the pair got back together, but the second act didn’t last, and they broke up once more in 2017, per The Blast.

As of 2019, DeVito and Perlman have remained officially unattached to one another — but then, their lives are so intertwined that it makes things complicated. On “Watch What Happens Live,” Perlman said that she and DeVito are friendlier now than in their last few years as a couple, explaining, “Because all the tense stuff is gone.” She added that they talk to each other often and “really agree on almost everything important.” DeVito agreed, previously telling People, “We’re friends. We’re happy. Everybody’s happy.”

13 Guys Who've Been Able to Call Emma Watson Their Girlfriend