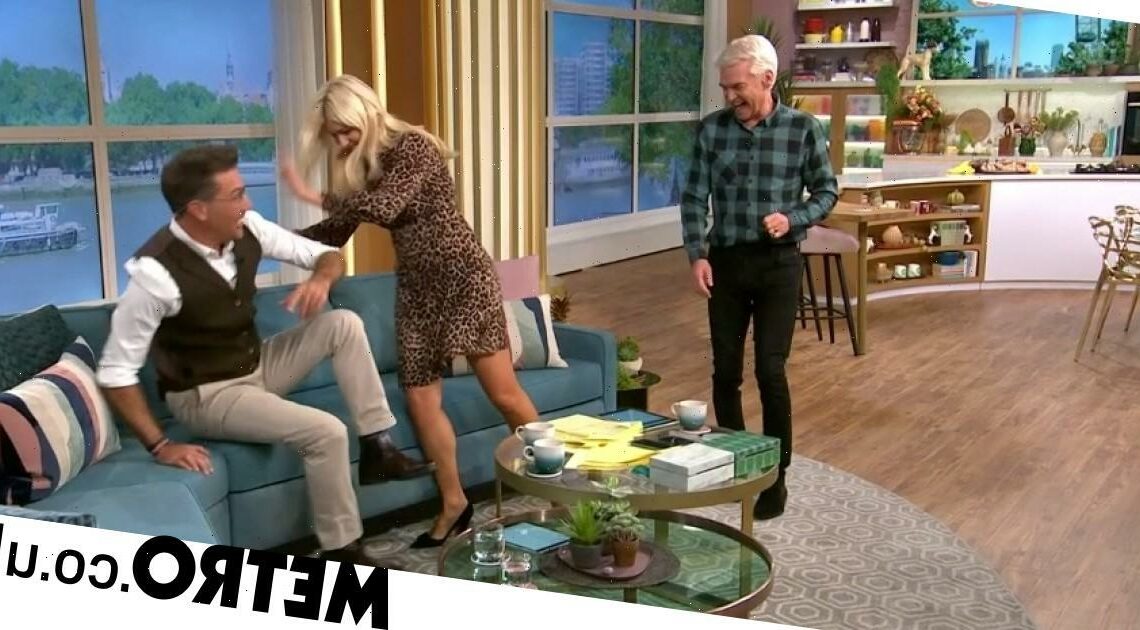 Holly Willoughby was taken aback on This Morning when moments into the show, Gino D’Acampo claimed that she reminded him of a character from The Flintstones.

Not quite the comparison we imagine she had in mind when getting dressed for the show!

On Thursday’s edition of the ITV programme, the cameras started rolling with chef Gino sitting on the sofa on his own, while Holly and Phillip Schofield took his place behind the counter in the kitchen.

As the presenting duo sauntered over to join him on the couch, Gino took a look at Holly’s leopard print dress, before exclaiming Fred Flintstone’s iconic catchphrase when he said: ‘Ah! Hello Wilma! Yabba Dabba Doo!’

Phillip burst into laughter, as Holly playfully hit Gino on the arm as she took her seat.

‘Why are you dressed like a Flintstone? Where is the bone?’ Gino continued as he referenced the cartoon character. 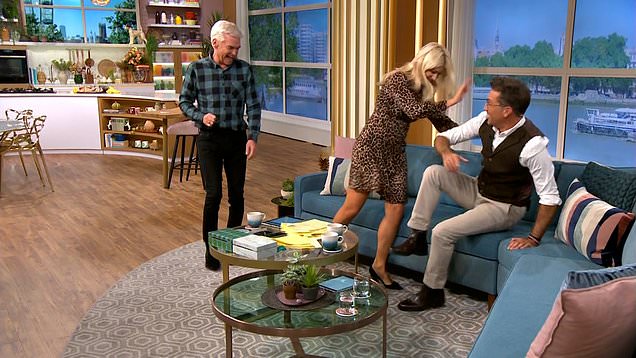 While in the cartoon, Wilma would usually be seen wearing a white dress and pearl necklace, her baby daughter Pebbles wore a bone to tie up her ponytail.

Wilma’s husband Fred, on the other hand, wore a leopard print outfit, complete with a bright blue tie.

Holly explained that the reason she was wearing the leopard print dress – not that it needed justifying – was because they had a leopard print fashion segment on the way later on the show.

Gok Wan, who’s set to host the fashion segment, defended Holly’s stylish dress, while Gino admitted that he doesn’t like it when he sees men wearing animal prints.

Nonetheless, when Holly speculated that he might have some leopard print pants in his underwear drawer, the chef confessed that he only wears them for special occasions.

Ahead of today’s show, Holly shared a picture of herself modelling the knee-length, long-sleeved dress on Instagram, sparking compliments from her followers.

‘Stunning. Gino, Holly looks amazing and not like a Flintstone!’ someone else said, while another commented: ‘This is so chic.’

This week, it was confirmed that Holly and Phillip are set to appear at the National Television Awards, which is taking place in mid-October.

Their appearance will come in the weeks following ‘queue-gate’, after ITV denied in a statement that the duo did anything wrong by visiting the Queen’s coffin as members of the press and not queuing for hours with other members of the public.