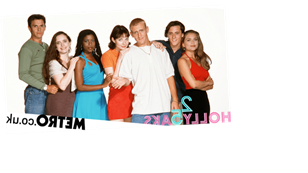 It’s a rather special day for Hollyoaks, as the serial drama celebrates 25 years on air.

Hollyoaks just completed a spectacular week of events to mark the milestone, as the identity of the sinister McQueen blackmailer was revealed, and original mainstay Kurt Benson (Jeremy Edwards) made a shocking return from the dead.

While no new outing airs tonight, the soap will still mark the occasion in a special way.

The very first episode will re-air on E4 as this week’s Friday Favourite.

An exploding car and a police chase also welcome us into the life, but brighter world of the Chester suburb.

Teen heartthrob, Kurt has been chasing after Natasha for weeks – quite literally on the back of his iconic motorbike. With best friends Tony and Jambo by his side, he manages to get into her friend’s party, but ends up racing to the girls’ rescue.

Natasha agrees to let Kurt walk her home to The Dog in the Pond, but will he get his goodnight kiss?

Don’t miss your chance to re-live a piece of telly history.