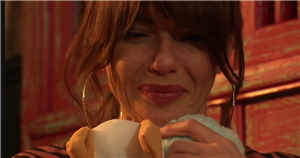 Hollyoaks viewers were left horrified on Wednesday evening as Cher McQueen (Bethannie Hare) got her revenge on her step-mother Mercedes (Jennifer Metcalfe).

The Dog landlady was forced to think on her feet during the latest first-look episode on E4 as her husband Sylver and Cher demanded to know what she was talking to Romeo Nightingale (Owen Warner) about.

Mercedes and Romeo were discussing their night of passion but were determined to keep their secret away from their partners.

As Cher pointed out that her boyfriend was "looking cosy" with her step-mother, Mercedes changed the subject made up that they were talking about George Kiss' death.

She told her step-daughter that Romeo was "sticking up for her" because she had doubts in her involvement in the murder.

Cher was horrified that Mercedes could think that she was responsible for the policeman's death.

Later in the episode, Mercedes discovered that she was pregnant and was left heartbroken.

She found solace in her stillborn son Gabriel’s memory box, but when she tries to use her loss to appeal to Cher, the teenager instead stole the box of memories.

Viewers were horrified that Cher could sink so low in her revenge campaign against Mercedes.

Taking to Twitter, one fan penned: "Cher that is sick."

Another aded: "No! Cher, why have you taken Gabriel's memory box? Evil!"

A third person posted: "Cher is such a selfish cow, I’m sorry but she’s being so self centred."

While a fourth social media user said: "The miscarriage of baby Gabriel still gets me in tears."

Mercedes was devasted when he noticed her late son's memory box was missing.

Cher was later seen holding a lighter close to Mercedes' prized possession but she was disturbed by Liberty Savage (Jessamy Stoddart).

Liberty explained that Mercedes was vulnerable due to her loss but Cher insisted that she didn't care about how her dad's wife feels.

In a shock twist, the memory box appeared in the pub and Mercedes was determined to find out why took it in the first place.

Cher later gas-lighted Mercedes by telling her that she forgive her for accusing her of killing George.

The troublemaker later told Sylver that the box was in the kitchen the whole time.

Jut before the episode came to an end, Cher played noises of a crying baby on her phone leaving Mercedes in a state of shock.

How far will Cher go to get her revenge on Mercedes?

Hollyoaks airs weekdays on Channel 4 at 6.30pm followed by a first-look episode on E4 at 7pm