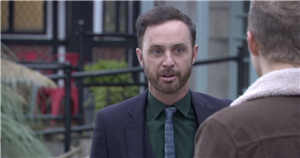 Hollyoaks favourite James Nightingale (Gregory Finnegan) has once again found himself on the wrong law after beating up creepy newcomer Mikey.

The lawyer struck out in violence after discovering the illegal Operation Bluebird.

He found out the truth about Fergus Collins' illegal surveillance stream, where men paid him to watch his sister Juliet Nightingale (Niamh Blackshaw), Peri Lomax (Ruby O'Donnell) and Maxine Minniver (Nikki Sanderson) in their bedrooms without them knowing.

Having vowed to become a better ally for Juliet and other women in the village, James hired a private investigator to find out more information.

James confronted Fergus for information about missing Timmy's wherabouts, but all Fergus said is that Timmy wouldn't be coming back because he was "a coward".

As James shared the news with Peri and Juliet, they caught a creepy man snapping photos of them.

Mikey then crudely quipped that it wasn't their "first time in front of a camera".

He said: "People on the dark web pay good money to see you two or they did until the live feed went down."

As the ladies gasped after hearing the revelation, James chased down Mikey.

He soon realised that Mikey is the son of the head of the law firm he was trying to merge with.

As James threatened Mikey, the creep responded with a warning of his own.

James furiously accused Mikey of being no different than Timmy, and when Mikey snarled that Peri and Juliet "loved every minute of" being watched, James attacked him.

Eagled-eyed fans were left gobsmacked at the scene and rushed to their keyboards to share their observation.

Taking to Twitter, one fan penned: "James getting arrested by his real life wife is amazing."

Another added: "Arrested by your off screen wife. Awkward."

A third person posted: "That was funny with James"

Greg and Anna tied the knot in 2011 and now live on the Wirral Peninsula raising their three sons in a beautiful family home.

The actor previously gushed about Ariana joining him in Hollyoaks.

He told Radio Times: "It's lovely having her here.

"The first scenes she did were actually with me when James had to identify the body."

Hollyoaks airs weekdays on Channel 4 at 6.30pm followed by first look episodes on E4 at 7pm

Heart attack symptoms: ‘Waxy growths’ on your skin that may be a deadly heart disease sign
Recent Posts