Home » TV and Movies » How old are Dick Strawbridge and Angel Adorees children? 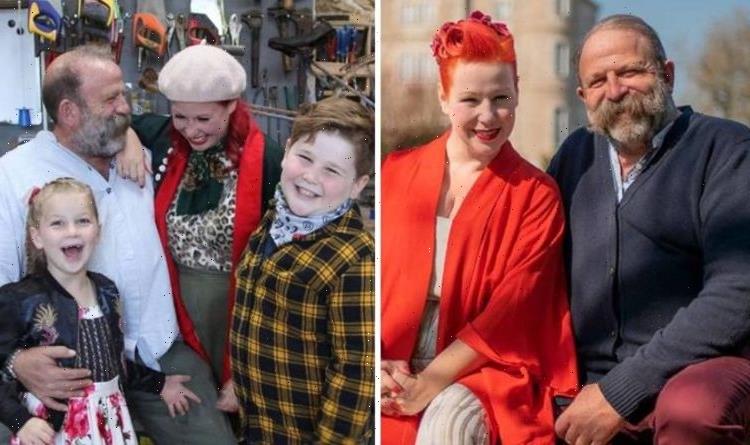 How old are Dick Strawbridge and Angel Adorees children?

Escape to the Chateau is back with season eight, airing a new episode every Sunday evening. The Channel 4 series is just as much about Dick Strawbridge and Angel Adoree’s family life as it is DIY. So it’s no wonder that fans are interested to know all there is about the youngest stars of the docu-series.

Dick and Angel left their life in England in 2015 for a stunning 19th Century chateau in the heart of Martigné-sur-Mayenne, France.

There was plenty of work to be done though as the chateau had been unoccupied for 40 years.

This meant no water, heating or electricity so it was essentially unhabitable for quite a while.

Their mission to get their new home in shape was made even more difficult with the presence of their two young children.

A post shared by Escape to the Chateau™ (@escape_to_the_chateau)

How old are Dick Strawbridge and Angel Adoree’s children?

Dick and Angel are the proud parents of Arthur Donald and Dorothy Francis.

Arthur was born sometime in 2013 which would now make him eight years old and Dorothy in 2014 so she is seven years old.

Speaking to Great British Life, Angel admitted she initially intended only to have one child.

She explained back in 2018: “I’m 40, so I was desperately at that right age to want to have children. If I’m honest I planned to have one, but Dick is the perfect father.

Angel added how even though they are now living in France, Arthur and Dorothy are having an “English” upbringing.

“They speak French at school and when they come home they speak English.

“Arthur thinks he can remember our Southend home. He says, ‘I’m a Londoner’ and Dorothy sees so much stuff about Queen Elizabeth around the house.

Dick is actually the father to two more children besides Arthur and Dorothy.

Prior to his relationship with Angel, Dick was married to his first wife Brigit Weiner.

The former couple had two children together, James and Charlotte Strawbridge.

James, 37, is a celebrity chef, and Charlotte, 35, is a singer-songwriter.

Escape to the Chateau is currently airing its eighth season on Channel 4.

Dick and Angel were welcomed back last month for the eight-part series.

The docu-series will end with an enchanting Christmas special next month.

Escape to the Chateau continues Sundays at 8pm on Channel 4.