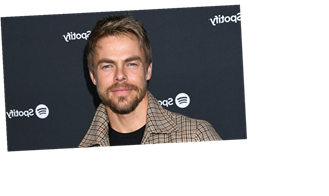 Derek Hough will join the upcoming second season of the original Disney+ series, ET confirms. The World of Dance judge and Dancing With the Stars champ has been cast in a recurring role.

Following the freshman finale, creator and showrunner Tim Federle spoke with ET about expanding the world of HSMTMTS and whether that included the introduction of new key characters.

“I’m looking big picture at how we expand the show, so that definitely includes the idea of new characters. Exactly where they’ll land or who they’ll be is still in clay phase,” he said in January. “But yeah, generally speaking in second seasons of shows, there are new faces and people to meet, so hopefully we’ll get some of that in our show too.

As for Miss Jenn’s messy love life, Federle hinted that her romantic situation provides prime real estate for juicy storytelling in season two — and with Hough now in the mix — it’s sure to be eventful.

“Exploring Miss Jenn’s romantic situation is a great headline for one of the things I’m approaching with this character in season two. I won’t say anything more beyond that,” he said, adding, “I think you’re picking up on interesting things and there’s a lot more stories with Miss Jenn to tell.”