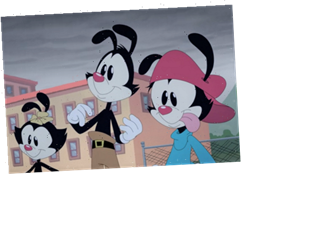 Hulu’s Animaniacs reboot premiered Friday (all 13 episodes are now available), and seconds in, Yakko, Wakko and Dot are back up to their old tricks. After returning to their beloved home on the Warner Bros. lot, the trio wastes zero time creating wreckage as they tornado their way through the studio, turning everything they touch into their own personal amusement park.

And what would an Animaniacs 2.0 be without Pinky and the Brain (Brain, Brain, Brain)? As if we even needed confirmation, the unlikely pair is still trying to achieve world domination. Bless their hearts.

So what kinds of shenanigans are these loony tunes getting into in 2020? Read on for highlights from the revival’s “totally insane-y, cockamamie” premiere!

JURASSIC LARK | “Steven Spielberg” helps launch the reboot with a ’90s-era parody that’s an absolute chef’s-kiss emoji. “This species of cartoon has been extinct since 1998,” Jurassic Park‘s Ellie says. “These haven’t been seen on TV since the Golden Era of animation!” Cut to Yakko, Wakko and Dot frolicking in the distance, peppered with hints of havoc. And how zany are they? “To the max!” Spielberg declares to the incredulous Grant, Ellie and Malcolm.

While Grant eventually loses consciousness, the Warner siblings “Boingy! Boingy!” their way off screen. Cue the theme song! Which is now “gender-balanced, pronoun-neutral and ethnically diverse,” mind you. How nice!

SUSPENDED ANIMATION | In this two-part cartoon, the Warners worry over what their first lines should be. “Make sure it’s good first… maybe something reminiscent of the first season?… but modern to show that we’re not your dad’s Animaniacs… but not so modern that you’ll alienate the dads, because they’re a key part of our demographic!” Yakko and Wakko exhaustively bounce ideas back and forth until Dot smashes them with a hammer. Oh, what classic, meta cartoon strife!

To no one’s surprise, they torture Ralph the security guard over his first lines, with Dot telling him to make sure it’s “something that really captures the intricacies of your character, for old and new fans alike.” He can only get a mumbled grumble out before he captures them with a drone net, the same net he finds himself in mere seconds later.

In Part 2, the Warners learn what reboots actually are, to which Yakko sings a “bitingly satirical” song about the trend, name-dropping Fuller House, The X-Files, Charmed, Twin Peaks and more. “If you want to make some easy cash, just recycle and re-hash!” they sing. To be honest, I kind of hope this tune shows up in my Release Radar playlist on Spotify one day. 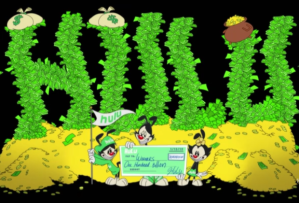 Yakko closes the bit by poking fun at the entertainment industry at large. “Reboots are symptomatic of a fundamental lack of originality in Hollywood. A creativity crisis fueled by terrified executives clinging to the past like rats to the debris of a sinking ship,” he says. (He said it, not us!) A man off-screen then hands them a fat check and calls them sell-outs. “Yeah, but when we sell out, we know we’re selling out, so it’s coooool!” Wakko exclaims. Hey, everybody’s gotta make that paper.

OF MICE AND MEMES | How do Pinky and the Brain take over the world in 2020? With a meme, of course! The Brain wants to give the people what they truly want, which Pinky agrees to, “but only if it’s tasteful and makes sense for my character!” The Brain reveals a subliminal mind-controlling filter he adds to a video of himself dressed like a baby mouse. When that doesn’t work, Pinky adds the filter to a clip of the Brain hurting himself on a globe, which goes viral and lands them a spot on Late Night With Seth Meyers. Unfortunately, they get bumped for a pig video Pinky also added the filter to (that’s showbiz!), and thus, the duo’s devious plan is foiled once again.

What did you think of the Animaniacs return? Grade the episode below, then tell us how you really feel in the Comments!