During Monday’s Good Morning Britain, Charlotte Hawkins and Adil Ray took on hosting duties while Susanna Reid takes some time off. Adil has been a familiar face on GMB since Piers Morgan famously quit the show in March. Alastair Campbell has also stepped in to co-host the programme alongside Susanna since Piers’ departure. However, before the pair went to an advert break during Monday’s show, they had a disagreement over what rights cyclists have being on the roads and whether they should ride in single file.

Adil and Charlotte’s disagreement comes after it was reported that cycling has increased by over 35 percent in London and nearly 50 percent in the South East.

The segment certainly sparked reaction from viewers, with one tweeting: “Discussion on cycling single file on Good Morning Britain – sometimes it’s easier to overtake cyclists if they are not in single file because there is less distance required when overtaking rather than weaving in and out. All depends on road/traffic conditions.” (sic)

Another penned: “Forget riding single file they need to learn how to use cycle lanes. I’ve lost count of the amount of times I’ve been out running and there’s a cyclist coming towards me on the pavement next to a cycle lane but they’ve refused to move over leaving me to run in the cycle lane.”

A third said: “If cyclists want to use the roads, then it should be mandatory for them to have road tax and insurance or at least insurance at a minimum.”

A fourth wrote: “One thing all cyclists by law must have is a bell…it’s currently advised…” 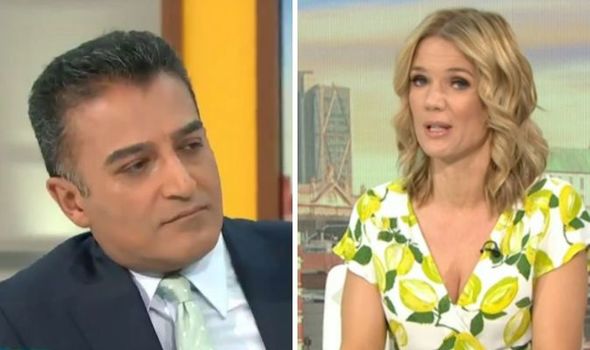