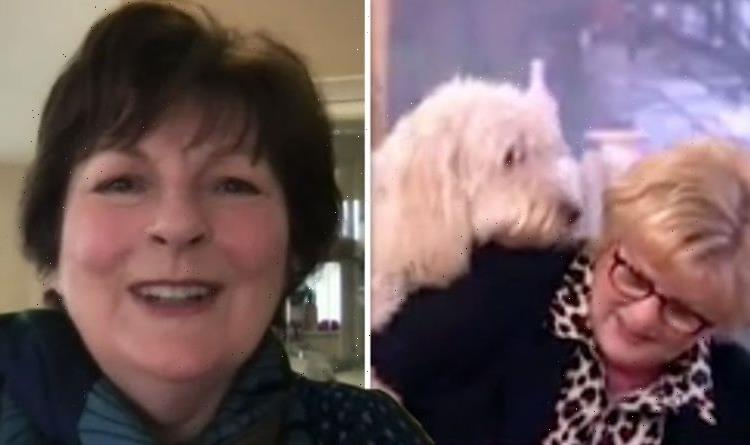 Vera star Brenda Blethyn joined Christine Lampard on Tuesday’s Lorraine to discuss the return of the hit ITV detective drama. The presenter, who has been stepping in for Lorraine Kelly over the summer break, teased the actress about an “embarrassing” moment she experienced on This Morning.

Christine asked: “What about lovely Jack, how is he doing? Does he come to visit you on set?”

“Yes he does but he’s not very polite so he has to stay in the office the girls there look after him,” Brenda replied.

“He’ll probably spend the next couple of weeks with me. I miss him, he’s a good boy.”

Christine reminded Brenda of a mortifying moment she experienced with her pet on This Morning.

Read more: Where is Vera season 11 filmed? Where is it set?

“None of us can forget that wonderful moment on this morning Brenda,” she commented.

“For those of us that don’t remember, Jack made quite the impression.”

Lorraine viewers were treated to a hilarious clip of Brenda’s dog jumping up and down on her during an appearance on This Morning.

Hosts Ruth Langsford and Eamonn Holmes were left in fits of giggles as Brenda attempted to make a hasty exit from the set.

“It had so many hits on Youtube it was so embarrassing,” Brenda revealed.

Last year, Brenda revealed she had to “ban” her canine companion from the set of ITV’s Kate and Koji.

Phillip asked: “And erm, did Jack go in for any filming day?”

“I think he’s banned, must have his photo up at the security gate,” Brenda quipped with Jack by her side.

“He did come to the rehearsal though, took a shine to Jimmy!” she added.

Holly joked: “Well we know what that means! How much of a shine?”

Brenda’s Kate and Koji co-star Jimmy Akingbola replied: “Me and Jack are like BFs, we’re like best friends now. He was hilarious. He was humping in rehearsals.”

“This really is Jack, by the way, he’s not a dummy!” Brenda, who was speaking via video call, noted.

“Is he not sedated, Brenda?” Jimmy joked and Holly added: “Jack does not understand social distancing.”

Vera continues on ITV on Sunday at 9pm.