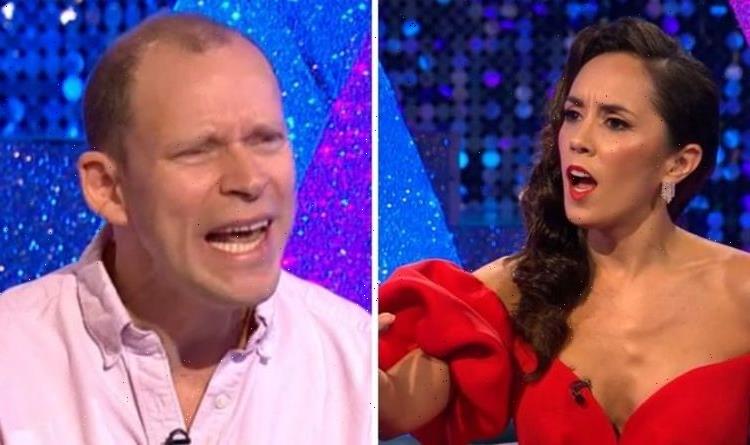 Strictly: Rob doesn't get why everyone loves his packed lunch

Speaking on Strictly – It Takes Two to host Janette Manrara, Robert was reminded of how he brings lunch with him to his rehearsals with dance partner Dianne Buswell. After this was also mentioned in last week’s Strictly Come Daning, the actor and comedian questioned why people found his lunch habits so interesting. He cheered up as the spin-off show on BBC presented him with a special gift, and the 49-year-old commented that he had “peaked” and could leave the show.

“You have a very interesting way of bringing your sandwiches to rehearsals,” Janette began as Robert and Dianne sat opposite her on the It Takes Two sofa.

Shaking his head, Robert asked: “What is this? Can a man not just make himself a sandwich without being accused of being adorable?”

“No don’t worry, we’ve got you something even more adorable,” Janette commented.

She added: “Dianne, will you please do the honours? Check behind pillowcase number one.”

As she saw what had been placed behind the pillow, Dianne responded: “Oh, stop!”

She pulled out a glittery lunchbox, complete with a photo of the pair of them.

Rob added: “That is lovely, are you sure you don’t want it?”

“No, you have to put your sandwich in there,” the Australian dancer and YouTuber replied.

Robert declared: “I certainly will. Is this glitter going to come off? No, it’s fine – it’s actually very well-made.”

“It’s so cute!” Dianna repeated as Janette remarked: “Now you can put your sandwiches in there and enjoy them in a nice lunchbox.”

“I love that,” Dianne added. Robert joked: “I will treasure this, my very own Strictly lunchbox.

“That’s it, I’ve peaked. I really will go home now.” Dianne agreed, stating: “We don’t need that glitterball, you’ve got that!”

It comes as the two found out at the last minute of last week’s show that they had made it through to week three – movie night.

The duo will be performing a quickstep to The Muppet Show theme song.

Last week, they received positive comments from the judges after their “more serious” Tango followed a humorous Cha Cha the previous week.

“Last week it was a parody of the Cha Cha Cha, you came out – it was all amusing,” commented judge Shirley Ballas as she gave the couple feedback on Saturday.

“This week, sophistication, seriousness, the really difficult footwork – you didn’t make any mistakes at all.”

She added: “And it was definitely on the right track, I’m really proud of you and you should e proud of yourself.”

Strictly – It Takes Two airs weekdays at 6.30pm on BBC Two, while Strictly Come Dancing continues on Saturday at 6.45pm on BBC One.