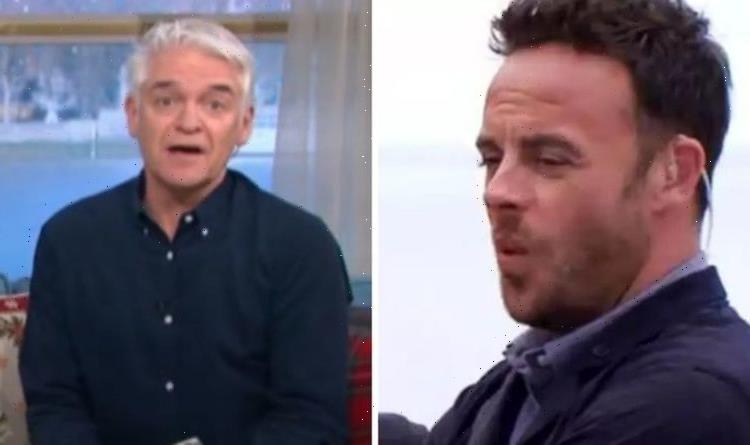 The hit ITV show was cancelled over the weekend as a precaution as the storm intensified, and the celebrities were removed from Gwrych Castle as a safety measure. I’m A Celebrity… Get Me Out Of Here! hosts Ant and Dec updated fans this morning to say they weren’t sure if tonight’s show would go ahead, and just hours later Philip Schofield was able to confirm the news that viewers would once again be missing out on another instalment.

While hosting This Morning, Phillip explained: “It’s been announced that there’s no live I’m A Celebrity tonight after the castle was hit by Strom Arwen over the weekend.”

Holly Willoughby continued: “Well, here with the latest on the crisis at the castle is former campmate Matthew Wright.”

The TV presenter and former contestant remarked: “Friday night we see Ant and Dec telling us that it’s bad – the net, effectively, has been that it’s destroyed the production.

“And I don’t know how much the viewers can imagine this, but it’s like a sort of Glastonbury Festival, it’s a huge village that’s under canvas.

“Everything’s filmed there – it’s dozens and dozens of cameras filming everybody 24 hours a day, all of it has to be edited, whittled down and turned into a programme.

“At the moment, as you can see, no one can work under those conditions because they’re really dangerous.”

He added: “And lest we forget, three people have died in this storm around the UK.”

Matthew replied: “I mean, ITV are keeping their cards close to their chest, but it’s quite clear that that is destroyed.”

The latest blow to the show comes following a series of incidents that have caused chaos to the 2021 series.

Just days in, one contestant had to leave the show following a health scare.

Good Morning Britain’s Richard Madeley had to be checked over in hospital after falling ill, and although he was told he was healthy, he couldn’t return due to COVID-19 risks associated with leaving the I’m A Celebrity bubble.

It was announced last Friday that the live show would not be running, with the programme airing pre-filmed scenes only.

Then on Saturday, ITV confirmed the programme would be cancelled completely for the weekend as the weather posed a safety threat.

Now that Monday’s episode has also been axed, viewers began to take to social media to question whether or not the series should continue.

Twitter user Lew Jefferies: Flux wrote: “#ImACeleb is cancelled tonight. Again. At this point, they may as well just postpone the entire show until the new year and start again, when Richard can rejoin.”

Sam Jones penned: “#ImACeleb #ImACelebrity So it’s cancelled again tonight. The camp mates aren’t back in castle yet. Set and filming area is damaged. They need 24 hours to film an episode. So when will it return?”

“I’ve a feeling the rest of this series of #ImACeleb will be cancelled,” Niamh Byrne chimed. (sic)

Later on Monday, an official statement from producers revealed I’m A Celebrity would return on Tuesday.

A spokesperson said: “I’m A Celebrity…Get Me Out Of Here! will return from tomorrow night (Tuesday 30th November) on ITV and ITV Hub with a brand new show.

“Ant and Dec will be back presenting live from the Castle.”

Past episodes of I’m A Celebrity… Get Me Out Of Here! are available to watch on ITV Hub.

Gunman who shot dead schoolboy, 15, is identified as Yussuf Mustapha