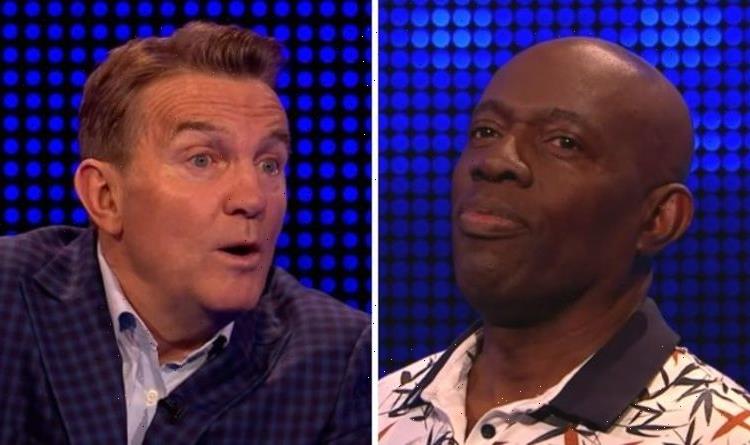 Bradley Walsh welcomed players Jinni, Mark, Rachel and Richard onto Wednesday’s instalment of The Chase on ITV. The first contestant up against Chaser Jenny ‘The Vixen’ Ryan was Richard who was optimistic about making it into the final. However, the player ended up being scolded by Bradley before his cash builder round had even started over a rather unconventional comment.

When Richard left his teammates to stand in front of The Vixen for the opening cash builder round of the game show, Bradley said: “Welcome to the show, Richard.”

However, the player’s response left Bradley, the other contestants, and the Chaser baffled.

Bradley scolded Richard: “No, no, no, I’m the host you are the guest.”

He quipped: “You don’t say welcome to me on here. They will all think, ‘What for?’

Following the dressing down from Bradley, Richard proceeded with the game show to try and answer as many questions right as possible within a short space of time.

Despite his best efforts, the contestant failed to answer numerous questions correctly and was offered to play the next round for either £3,000 or £300.

His teammates told Richard £3,000 was a “safe bet” and had faith in him that he’d make it into the final of the episode.

While Richard agreed to follow the advice of his teammates, he soon found himself struggling in the next round against The Vixen.

After he was asked a rather niche question about Buffy The Vampire Slayer, which The Vixen so happened to be an expert in, Bradley said: “Here’s your next question.”

However, Richard interjected saying: “We’re two away from home.”

But Bradley shut him down for a second time by replying: “Alright, I’m in charge.

“Thank you very much – we are two from home. Here’s your question…”

Richard continued to giggle over the blunder but he managed to compose himself to continue the rest of the round.

However, he failed to beat The Vixen and was sent home with nothing after getting a question about a Mexican stadium wrong.

Following his defeat, Bradley said: “I’m sorry Richard, it was great having you on the show, you were great fun.”

Bradley told the DJ: “Cheers mate, it was lovely to see you. Thank you so much.”

After Richard left the stage Bradley said to The Vixen: “I liked him a lot, [he was] a cool dude.”

In the end, just two contestants, Jinni and Mark, made it through to the final. However, they also went home empty-handed after being thrashed by the Chaser.

The Chase continues weekdays at 5pm on ITV.

Young Dolph Dead at 36, Shot and Killed in Memphis