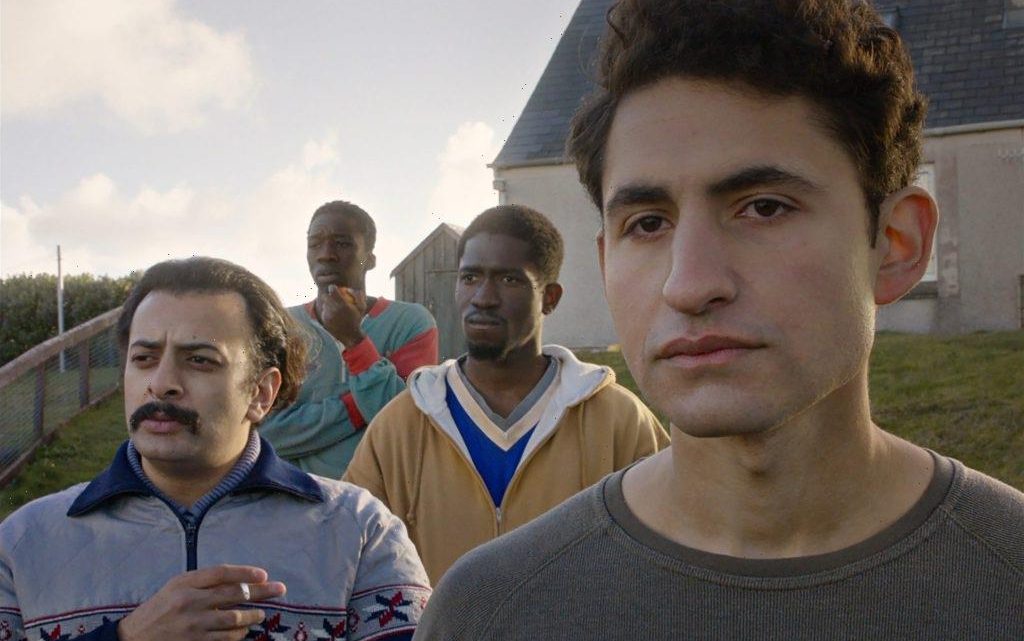 The plight of Middle Eastern refugees awaiting asylum in the West is given a mordantly absurdist edge in Limbo, a tart socio-political tale in which the urgency of distant tragedies is siphoned into a timeless setting in the Outer Hebrides, where almost nothing ever happens. The result resembles a Samuel Beckett-like piece rewritten by Bill Forsyth, a combination that squeezes mirth out of cold stones. Selected for the 2020 Cannes Film Festival that never happened, this BAFTA-nominated Focus Features acquisition ended up premiering in Toronto and will now be released domestically on April 30.

This second feature from British director Ben Sharrock, whose debut was the little-seen but well-reviewed 2015 Pikadero, about a young couple weathering an economic crisis in Spain, similarly places its protagonists in perilous straits not of their own making. There could scarcely be a less noticeable place in the UK to sequester political refugees than in the sparsely populated northwestern-most islands off the coast of Scotland. Next stop: Iceland.

There’s only one spot on the island where you can get cell service, and the guys tend to crowd around the sole phone booth, which is perched beside a lonely lamppost. “Is it like Guantanamo?,” asks the mother of Omar (Amir El-Masry). On its surface, the question is absurd, as there is no abuse or imprisonment. The men have minimally comfortable places to stay, are free to wander around and are not under any physical threat. At the same time, their fates and ultimate status remain unknown, awaiting shifts in the political winds, the whims of politicians and the luck of the draw. A doctor comes around once a month, weather permitting.

Omar is paired in tight quarters with a roommate, Farhad (Vikash Bhai), keen on a friend-with-benefits arrangement, but that’s not Omar’s scene. Sharrock punches up the absurdist aspect of the men’s predicament through consciously bleak staging that accentuates the smallness of the men against the vastness of the sky and sea. He also knows how to effectively goose the proceedings from naturalism into the forlornly humorous, a tone he maintains with welcome discipline most of the time.

Some of the refugees have been on the island for three years, with no end in sight; gradually, the absurdist aspect of their time in purgatory takes on an added tragic dimension of men’s lives being wasted away, day after day, month after month, year after year, with nothing being achieved or resolved. Stunning summer ultimately yields to brutally bleak winter, but when Omar thinks of the alternative — serving in the Syrian army — his decision to flee his native country is reinforced.

Ultimately, Omar’s mordant melancholy feels far preferable to the fear and loathing that dominated his previous life, as at least he can dream of some hope around the corner (even if corners are a rare sight in seaside Scotland). Writer-director Sharrock has a fine feel for his beleaguered protagonists, and El-Masry embodies a sad-sack optimism that welcomes viewer sympathy.

Only the ending comes up rather short; Sharrock concocts a comparatively upbeat finale at a concert that, to be consistent with the rest of the film and Omar’s continuing predicament, needed to be more complex, bittersweet and resonant with everything that’s come before. It’s too feel-good both for the real-life predicament and the carefully judged nuances that defined most of what’s preceded it.

Leonardo DiCaprio set to remake Oscar-winning Danish film ‘Another Round’