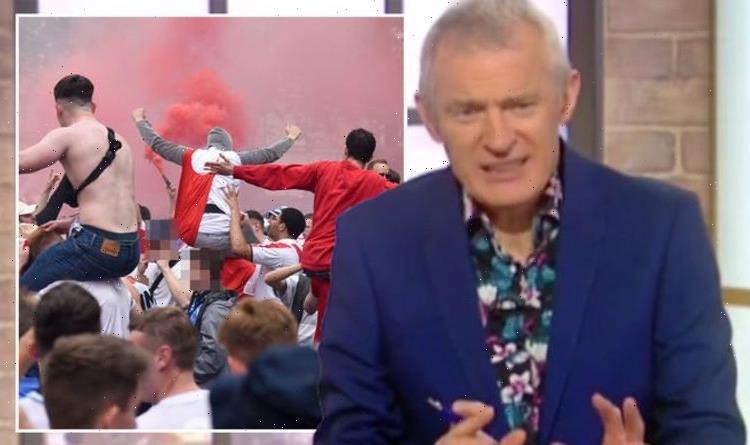 Jeremy Vine was keen to hear from Channel 5 viewers on Monday all about their thoughts on Italy’s penalty shoot-out victory over Gareth Southgate’s men. However, it wasn’t just the drama on the pitch that has made headlines as several videos emerged online showing unruly behaviour from some fans, with a number breaking down barricades to make it into Wembley without tickets as well as anti-social behaviour in London’s Trafalgar and Leicester Squares. The pictures from the weekend prompted caller Joshua to tell Jeremy he felt it was time we “start from scratch” with England fans – and declared they should go through a “training camp” to prevent such incidents.

Joshua’s claims came after Jeremy had opened a debate on whether it was time to stop singing the popular song Three Lions by Baddiel and Skinner.

The song’s tagline “It’s Coming Home” has been belted out by fans throughout the tournament but with England failing to win a major international tournament since 1966, Jeremy put to viewers and the Channel 5 panel whether it was time to adopt a new anthem.

But Joshua insisted the song wasn’t the issue, but rather the unruly attitude from certain parts of the fanbase.

“And the issue is we’re bringing bad karma on ourselves by booing the national anthem of someone else country,” he added as he began to reel off examples.

He continued to Jeremy: “Putting our fans’ faces into Denmark childs’ faces, mocking the little girl crying having a trauma,

“Attacking Danish women coming out of a football match. This is the problem.”

However, Jeremy hit back at the caller, insisting these problems he’d referred to weren’t reflective of every England fan.

“These are all isolated incidents,” Jeremy protested. “You’re picking on individual things.

“You’d probably get that at a snooker tournament,” Jeremy continued which prompted his guest Nina Myskow to interject: “No you don’t.”

And Joshua was in agreement with Nina as he passionately interjected: “You don’t.”

He added: “Send those people who go to those matches to support England and send them to a training camp to tell them how to b****y behave!”

Turning to co-host Storm Huntley and the rest of the panel, Jeremy outlined Joshua’s stance.

“You’d apply for the job of England fan and be interviewed for your attitudes and Joshua says send them to a training camp,” he explained.

On the pitch, England lost out to Italy after a tense and nail-biting penalty shoot-out.

During the game, Luke Shaw saw his early opener cancelled out by Leonardo Bonucci who scored to make it 1-1 at full-time.

Jeremy Vine airs weekdays at 9:15am on Channel 5.