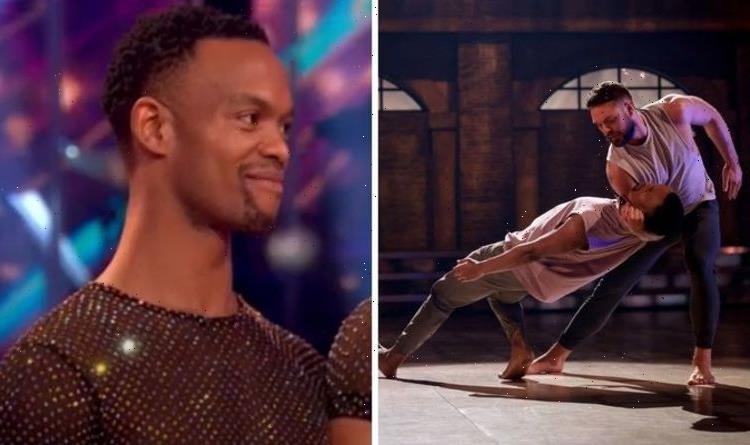 Strictly: John and Johannes react to being in bottom two

The Strictly Come Dancing couple is the first all-male partnership in the history of the BBC show, and Johannes told Express.co.uk and other media that he had hoped he would be partnered with Great British Bake Off star John Whaite before it was announced. He explained how his mother initially hadn’t responded positively to the news, but that she has come to love the series and their relationship has improved.

Speaking ahead of Saturday’s final, John and Johannes opened up to Express.co.uk and other media about their time on the show and how proud they are to have made history.

“My mum’s relationship with me has improved because of John,” Johannes stated, becoming emotional.

He continued: “When I told her about it she said, ‘oh you’re dancing with a man?’

“Because she’s such a traditionalist.

“I said, ‘yes and his name is John’, and there was this awkward silence.

“She also waited to see, like everyone else, how it played out.

“And I remember after our first tango, she called and said ‘that was brilliant’.”

When asked about how he felt ahead of the highly-anticipated final, John, 32, stated: “We’re really calm, aren’t we?”

He continued: “The thing is, this week, we’re not bothered about winning.

“We’ve got this far. I didn’t think I’d get this far, so whatever happens is fine.

“The thing is I’m just really happy to be here and it’s been incredible, really incredible.

“Throughout the series, we’ve seen people grow up in a world where two men or two women can dance together is mega.

“Old members of the LGBT community who have paved the way for this to happen as well.”

Viewers will be looking forward to Saturday’s final, which will see either John and Johannes, AJ Odudu and Kai Widdrington or Rose Ayling-Ellis and Giovanni Pernice crowned winners.

The show confirmed a bombshell ahead of Saturday though, as AJ suffered a painful injury to her ankle.

It is hoped she will still be able to perform on the live show, although she admitted she has been “unable to stand” this week.

Despite minimal rehearsal time, the 33-year-old is determined to take her place in the final.

Judge Craig Revel Horwood confirmed on Thursday that the TV presenter had undergone treatment for the injury.

The Strictly Come Dancing final airs on Saturday at 7pm on BBC One.

Covid cases are NOT doubling every two days