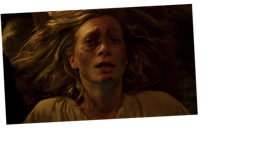 Actress Mirrah Foulkes makes her directorial debut with “Judy & Punch,” a violent and revisionist tale that looks more like “Who’s Afraid of Virginia Woolf?” goes to the puppet show than your classic Punch and Judy story. The period piece, which launched at the Sundance Film Festival in January 2019 and was followed by a robust tour on the festival circuit, finally hits theaters in the U.S. on April 24, courtesy of Samuel Goldwyn Films.

Set in an anarchic town known as Seaside, which happens to be nowhere near the sea, married puppeteers Judy (Mia Wasikowska) and Punch (Damon Herriman) are struggling to resurrect their marionette show. The show is a hit thanks to Judy’s deft puppeteering skills but due to Punch’s jealousy-fueled ambition — and his tendency to hit the bottle too hard — the show is thrust into tragedy. Foulkes’ updated take on the classic 16th-century puppet show, a staple of British theater, turns this mythic tale on its head as a feminist revenge story.

The cast also includes Tom Budge, Benedict Hardie, Lucy Velik, and Terry Norris. Foulkes is known for her performances on TV’s “Harrow,” “The Crown,” and “Top of the Lake,” as well as in films such as “War Machine” and “Animal Kingdom.” She also wrote “Judy & Punch,” which looks to herald an indie comeback from Wasikowska, last scene most prominently in “Piercing” and “Alice Through the Looking Glass.” Herriman is most recently known for his uncanny turns as Charles Manson in both “Mindhunter” and “Once Upon a Time in Hollywood.”

Last year, The Guardian called the 17th-century debut “a mouth-puckeringly tart treatise on mob mentality and male aggression,” “a brilliantly bizarre #MeToo fairytale,” and “darkly disturbing, absurd, brutal and silly, with a batsqueak of bonkers.” Little White Lies wrote, “Foulkes does balanced work here, both retaining the ingredients of her source material and melting them down into a twisted live-action fairy tale that is distinctively her own, with the magnificent Mia Wasikowska acting with poised fury as Judy, a female avenger of male violence.” Wasikowska is no stranger to a violent set piece, if her stellar turns in “Maps to the Stars” and “Stoker” are any indication.

Watch the trailer for “Judy & Punch” below.