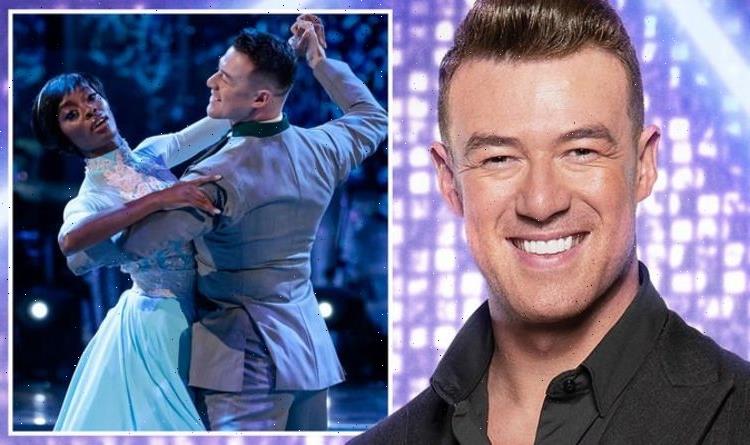 Kai Widdrington suffered a heartbreaking end to his journey on Strictly Come Dancing this year as his celebrity partner AJ Odudu was forced to pull out of the BBC competition’s finale with an ankle injury. Kai impressed in his debut season on the show but now it’s been revealed he’ll be stepping back from professional duties on Ireland’s version of the contest, Dancing with the Stars.

Kai had been a familiar face on Dancing with the Stars Ireland since 2017, first taking to the dance floor with actress and comedienne Katherine Lynch.

In 2020, which has now turned out to be his final outing on the Irish show, Kai teamed up with Miss Universe Ireland winner Gráinne Gallanagh – with the duo finishing as runners-up.

This year, DWTS Ireland was postponed as a result of the pandemic and as a result, Kai joined the professional line-up on Strictly Come Dancing where he landed AJ as his famous companion.

Now a firm favourite among the Strictly fandom, Kai will not return to DWTS Ireland with a number of new professionals joining the line-up in his absence.

And of course, the Irish version of Strictly needs a star-studded line-up.

Irish newsreader and broadcaster Aengus Mac Grianna and musician Billy McGuinness are two of the stars penned to appear.

Cathy Kelly, Ellen Keane, Erica-Cody and Gráinne Seoige will also be paired with a pro dancer each for the upcoming competition.

News of Kai’s withdrawal comes weeks after he and AJ were forced to miss out on the Strictly final – which saw EastEnders’ Rose Ayling-Ellis crowned the winner.

The pair were devastated by the withdrawal and explained on BBC spin-off It Takes Two what had happened.

AJ said: “My ankle’s given way and my ligament has ruptured and it’s just not gonna happen. We’re gutted because we were ready to smash it.”

Wiping tears away, Kai added: “We were really hoping that we were going to get over the line and get into the final and dance in the final.

“We had two very energetic dances that were given – the Charleston and the Jive – and we were like if we can change them maybe we can do something, but the injury’s just too bad.

“At the end of the day, AJ’s health is number one concern, so although we won’t be dancing in the final, we earned our place in the final, so we’re still over the moon.”

Rose and her pro partner Giovanni Pernice managed to best John Whaite and Johannes Radebe in the Strictly final to lift the Glitterball Trophy.