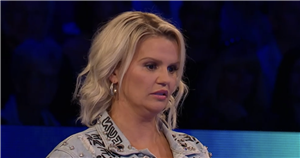 The Atomic Kitten star was left baffled by host Ben Shephard's quick-fire questions, and stumped by plenty of the general knowledge quizzing on the show.

Kerry joined comedian Miles Jupp and Newsnight's Kirsty Wark to compete for the iconic jackpot, with the money going to charity.

However, Kerry stumbled over a few questions early on the show, asking Ben: "Shall I just go home?"

As Miles beat her to the punch at buzzing in for one of the questions, Kerry insisted: "I was gonna press that!"

Kirsty, meanwhile, joked Miles was "premature" in pressing the big red button too quickly – but when she got a question correct which left Kerry still scratching her head, she threatened to leave her fellow quizzers to it.

"Shall I just go home?" she asked Ben.

And she even said that quizzing was even harder than competing in the I'm a Celebrity… Get Me Out of Here! jungle, adding: "This is worse than winning the Jungle, this!"

However, Kerry later stormed to victory, eliminating both Miles and Kirsty as she stepped up to the plate to compete for the jackpot counter for her chosen charity.

But when Kerry came to nearly scoop the jackpot counter from the machine – narrowly avoiding it each time – she was left so distraught that she fell to her knees and had to be helped back to her feet by host Ben, wailing as she did so.

"I don't know why I keep bending down!" Kerry giggled.

But a history question managed to trip her up, about which animal President John Quincy Adams kept in his bathtub in the White House – opting for a piranha instead of an alligator.

She opted to take the trade for one last-ditch attempt at winning the jackpot counter, admitting: "I came here with nothing – I'd always wanted to say that! – and I'd kick myself if I didn't at least try!"

Unfortunately, the former Queen of the Jungle didn't manage to secure the £20,000 jackpot – but she did take home £1,000 for her chosen charity.

Tipping Point continues at 4:35pm on Monday on ITV.

What are the rare McDonald's Monopoly pieces 2021?