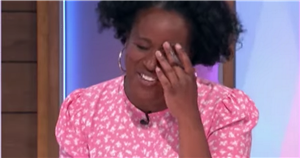 Loose Women anchor Charlene White had to apologise to viewers twice on today’s show after not one, but two stars accidentally swore live on air.

First panelist Linda Robson accidentally got carried away as she told her co-stars a story about her daughter.

Moments later, one of the ITV show’s guests, Emmerdale actress Nicola Wheeler, had a slip-up while talking about her soap alter-ego.

And both incidents left Charlene saying sorry to the audience at home, as she asked: “What is going on today?” During a discussion about ‘modesty shorts’ Linda, 63, said: “Can I just say, my 30-year-old daughter needs some of those shorts.”

“I was away with her for the weekend in Clacton and me and the other nanny, nanny Brenda, couldn’t believe how many times she bent over to pick up something, or to do one of the kids shoe laces up and there was a total eclipse.”

Linda was so engrossed in her anecdote that she then said: “The cheeks of her a**e… bottom you could see.”

After correcting herself and putting her head in her hands in embarrassment as Charlene scolded her for using a “naughty word”, Linda added: “I apologise everybody… Oh no!”

But just minutes later, Emmerdale’s Nicola, who plays Nicola King in the ITV soap, appeared via video link to talk about her big storyline and made a similar gaffe. Speaking about playing a character with exactly the same name as her, the 47-year-old actress explained that she often gets confused whether people are referring to her or her on-screen persona.

Nicola then made her slip-add as she quipped: “If they say the word b***h then it’s me… no I’m joking!”

As the rest of the panel giggled, Charlene started laughing as she interjected: “Oh no! Nicola you can’t say that. What is with everybody today?”

“I'm going to apologise on behalf of Nicola, for Nicola's language. Ladies, come on, I know it’s Monday but head in the game.”