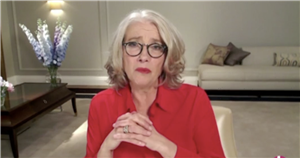 Lorraine viewers were left scratching their heads on Wednesday during an interview with Hollywood stars Emma Stone and Emma Thompson.

Fashion expert Mark Heyes often offers his style tips on the ITV morning show but he stepped up to interview the two stars during the latest instalment.

After chatting about the upcoming movie release, conversation quickly turned to underwear.

Thompson, 62, admitted that she no longer wears underwear during the television chat.

Viewers at home were left wondering gobsmacked that Mark asked the acting legend about her under garments.

Taking to Twitter, one fan penned: "Why are we still asking women about their underwear in interviews? Are these really the hot topics? Emma Thompson's underwater for a kid's movie?"

Another added: "Who told Mark he could interview celebrities?"

While a third viewer posted: "Emma Thompson on Lorraine discussing underwear is a no no!"

"The underwear that was required to turn me into that shape can only be described as industrial."

The interview comes after Thompson opened up about her costume drama on the set of Cruella.

The Oscar winner told The Sun: "My underwear was like a sort of ship’s rigging. I mean, there were people hauling on ropes.

"It was a lot. So peeing was hard and involved a team of people."

"The underwear was a big old deal. Not for la Stone, obviously, because she’s slender as a lily and didn’t need to wear a corset like a frigging whalebone aria."

The 101 Dalmatians prequel, which comes out on Friday, is one of the first big movies to be released into cinemas since lockdown eased.

Set in 1970s London, it tells how Cruella first grew cold-hearted and is packed with extravagant costumes.

They include the Baroness’s broad- shouldered dresses that curl up, like something that fellow Disney baddie Queen Maleficent would wear.

Horse racing tips: This 12-1 Hamilton shot is primed to strike again as a course and distance winner