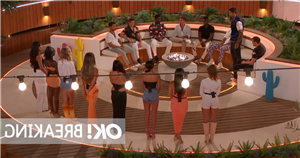 Thursday night's episode of Love Island will see yet another recoupling, with the choice being in the boys' hands.

The recoupling comes after viewers were tasked with choosing their favourite individual Islanders – leaving the least popular at risk of being dumped.

In tonight's episode, there will be excitement in the air for some desperate to get off the daybeds and nerves for others about who will choose whom.

As the newest Islander, Adam Collard gets first choice. He begins: “ From the moment I came in here, she made me feel most welcome.”

Meanwhile, another of the boys starts his speech off opening up on how much he "adores" the person he's picking.

"I absolutely adore her and I find myself always wanting to be around her. When I miss her the feeling is unbearable," the lovestruck Islander says, while another discusses their future.

"Every day, day by day we are always more and more sure about our future together," they gush.

The boys aren't the only ones getting mushy – Tasha Ghouri will also voice her feelings for Andrew and how she wants to make him her boyfriend.

The blonde beauty has been busy planning a special surprise and gathers her fellow Islanders to let them know she’s going to need their help.

Tasha reveals: “I’ve been planning on making Andrew my boyfriend!”

She adds: “I’ve made up a whole speech.”

Leaving notes around the Villa in special places for the couple for Andrew to find, Tasha waits nervously for the other Islanders to kick the plan into action.

Islanders will also be told that the public has been voting for their favourites, and those who haven't received the most votes may be dumped.

Ekin-Su Cülcüloğlu receives a text message asking all Islanders to gather at the fire pit.

The shocked couples gather around, where they learn that the public has been voting.

Adam reads: “The public have been voting for their favourite girl and their favourite boy. Those with the fewest votes are at risk of being dumped from the Island tonight.”

From Picasso to Van Gogh: The lost artworks found thanks to technology
Recent Posts