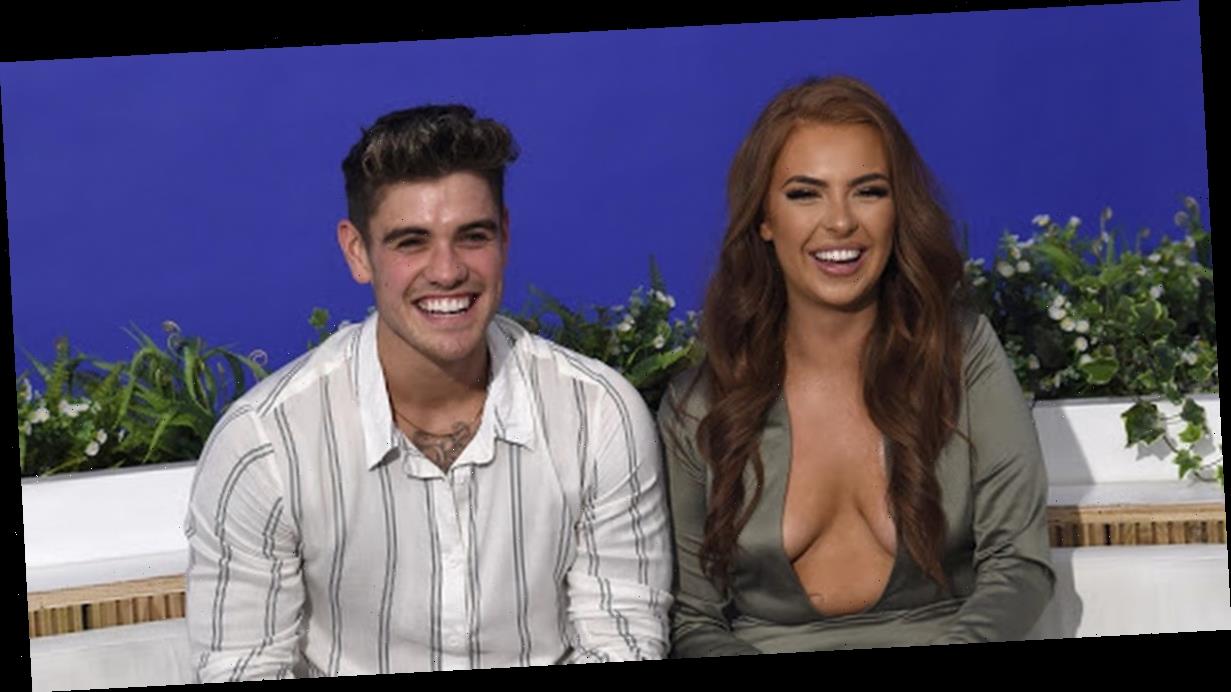 Love Island stars Demi Jones and Luke Mabbot are still looking at loved-up as ever almost a month after leaving the the show.

The couple, who came third in the first edition of the winter version of the show, were spotted out and about in Manchester, and auburn-haired Demi, 21, in particular was hard to miss.

The Portsmouth-based beauty looked absolutely stunning in a satin khaki mini dress that had a plunging neckline that went almost all the way down to her navel, and showed off her assets.

The dress perfectly showed off her gorgeous tan that has yet to fade since her return from South Africa last month.

She completed her outfit with a pair of see-through heels, and her hair and make-up was also perfectly done.

And Demi's boyfriend Luke M didn't look to shabby either.

Luke and Demi both looked really happy to be out with each other and have seen their relationship thrive since leaving the villa.

They were in Manchester to film with clothing brand and Love Island sponsors I Saw It First, at their HQ.

But not all Love Island couples appear to be as loved-up as Luke and Demi, as fellow Islanders Callum Jones and Molly Smith got into a blazing row during a boozy night out in Manchester, according to reports.

The couple are said to have a huge barney in the club before Molly, 25, ditched Callum, 23, and got picked up by a pal and did a PA with fellow islander Natalia Zoppa.

Callum was heard ranting about their fight, and it's reported friends of the couple think they may be on the rocks.

A source told The Sun : “Callum and Molly were on a boozy night with some of the other Islanders.

After dinner they headed to a club but things got heated.

“Molly and Callum were really arguing so she decided to leave without him. She was picked up by a mate and he came stumbling out on his own ranting about their argument.

“They have already made up and have put on a loved up display on Instagram but friends think things are pretty rocky and are worried they won’t last much longer.”

MirrorOnline has reached out to reps for Molly and Callum.

Callum and Molly met on this year's Love Island , where Molly entered as a Casa Amor bombshell and turned Callum's head away from Shaughna Phillips.

Shaughna was furious and heartbroken, and she recently hinted at why the dumping especially stung.

During an interview she appeared to admit to having sex with Callum during their stint in the villa.

She was quizzed about who had sex in the villa with during a cheeky chat with Heat magazine, where Molly was present.

And after the saucy question was out to here the London beauty was quick to hint that the villa saw some sexual activities take place.

Turning to her fellow islanders , who acted shy upon the mention of the topic, she said: “Are you all saying no? I am not saying nothing. None of you should walk into church or you'll burst into flames!”