Mandy and Kristen Tyk on Bringing Visibility to ‘Pig Royalty’

On the fascinatingly addictive Discovery+ seriesPig Royalty, rivaling Helotes, Texas, families, the Baleros and the Rihns, battle it out for buckles and bragging rights in the fiercely competitive world of pig showing. While both teams are full of real-life characters that feel plucked straight out of Dance Moms or the Christopher Guest film Best in Show, two of the breakout stars are Mandy and Kristen Tyk, a married couple and parents of their 16-year-old son and competitor, Brandon.

“After Brandon did one season of it, it was like, ‘OK, we’re hooked. We love these animals. They’re awesome,'” Kristen tells ET of her family initially getting involved in the sport. While fully aware of just how competitive it is, she and Mandy did not know about any of the politics that fueled the rivalry between the Baleros and Rihns until filming the series. “This definitely opened our eyes to some of the political things that go on… We were in our little bubble.”

That is until Jodi Rihn recruited them for her team. “Jodi basically called and said, ‘We want y’all on our team. Y’all are great with pigs and let’s do this,’” she says.

Although everyone agreed to participate, Kristen admits there was some hesitation, especially around showcasing their relationship on camera. “We’re very private about our relationship, especially being in South Texas,” she says. “And so there was some talking. We also sat down with Brandon and said, ‘Look, you’re going to be viewed as having two moms. Are you OK with that?’”

And prior to being filmed for the series, they didn’t hold hands in public or even display any affection in front of friends or family members. So when the cameras captured them kissing, they were understandably nervous about how it would be received. “Nobody has ever seen us have affection towards each other,” Kristen says. “Our parents, our family or friends, literally nobody.” 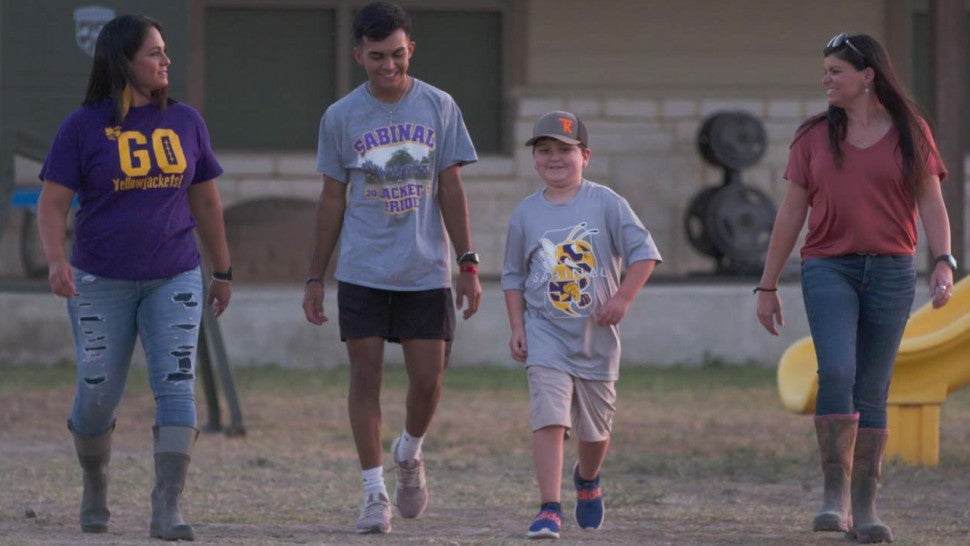 But in the end, they had an overwhelming positive response from those around them as well as fans who saw themselves represented onscreen. “I love the way our story came out and what we shared publicly because I had several messages of young girls, young boys, you know, messaging me: ‘Hey, I’m in small town, USA. And seeing y’all open and share your story really made me more comfortable now in our town because it’s difficult,’” Mandy shares.

“I’m more comfortable with my own sexuality,” Kristen adds of the experience. “So, it’s definitely been better.”

Of course, being documented on camera also means that some of the toughest times in their relationship were also seen, especially when divorce became a topic of conversation. “It was a hard time,” Mandy says, revealing that at the time they hadn’t disclosed what they were going through with anyone else. Kristen adds that because they fought so hard to get through to the other side of it that they wanted to hide it. “It’s hard to see all of our fights and struggles,” she says.

But again, going through that and watching it back, “changed our relationship for the better,” Kristen says.

If there is one moment that was not captured on camera that they do wish made it onto the show, it was Brandon, who is seen as an underdog all season, winning his first showmanship buckle. “It didn’t make it,” a very proud Kristen says. “Like, all of our hard work and he wins the damn buckle.”

“I wish y’all could have seen it,” adds Mandy, equally as proud of their son’s achievement.

The season finale of Pig Royalty is now streaming on Discovery+.