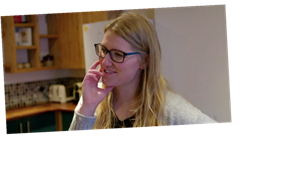 Married at First Sight returned to Channel 4 on Tuesday with newlyweds Michelle and Owen starting their new lives together.

Primary school teacher Michelle, 25, from Hastings, tied the knot to stranger Owen, 31, from Sheffield, days before the nation was plunged into lockdown in March of this year.

Despite only knowing one another for a week, they chose to self isolate together, moving from Brighton to Owen's mother's empty house in Horsham.

Michelle discovered Owen's collection of toys during the latest episode of the relationship experiment series.

When Michelle arrived to his mum's house, Owen quickly introduced his blushing bride to "Dino" and his other toy friends.

Michelle laughed: "I enjoy the fact you still have toys. Two toys."

IT technician Owen protested: "It’s not a toy, it’s a model dinosaur."

He did attempt to defend his collection, saying: "I wouldn’t say I’m a man-child but I do enjoy some of the nerdier things in life.”

Viewers at home rushed to their keyboards to discuss Owen's toy collection.

Taking to Twitter, one fan penned: "Having kiddy toy dinosaurs is not a quirk, it's a bloody worry!"

Another added: "It’s not a toy it’s a model dinosaur… ok then."

A cheeky third person asked: "Did she bring any toys?"

Just as Michelle and Owen moved in together, the global pandemic reached Britain putting unprecedented strain on their relationship.

Michelle revealed she was nervous about moving in with Owen.

She said: "I've never lived with a partner before so I hope my messy habits don't scare him off.

"It feels a little bit daunting because I've hardly known Owen for very long and there is nowhere to hide when you live with someone."

The couple were in lockdown together for a month before Michelle joined matchmaker Jen for a Zoom call to discuss their relationship.

She told the matchmaker: "I think he is great.

"My only worries are to do with myself and whether I measure up."

The couple later dropped the L-bomb as their relationship blossomed in lockdown.

Married At First Sight is on Channel 4, Tuesday at 9:15pm

Jamie Foxx To Star In Vampire Comedy For Netflix