Home » TV and Movies » Melissa McCarthy Says Her Husband Has 'Fallen Pretty Hard' for Harry Styles: 'Not a Bad Choice' 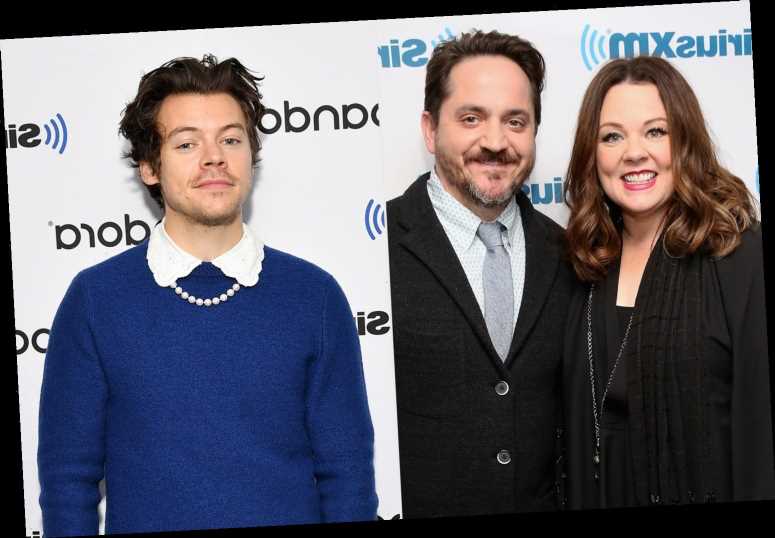 Melissa McCarthy Says Her Husband Has 'Fallen Pretty Hard' for Harry Styles: 'Not a Bad Choice' Despite being a married man, Melissa McCarthy says that her husband Ben Falcone is smitten with Harry Styles.

While appearing virtually on Thursday's episode of The Ellen DeGeneres Show, the 50-year-old actress told host Ellen DeGeneres that her director and actor husband, 47, has "fallen pretty hard" for the former One Direction member, 26.

"He's fallen pretty hard for Harry Styles, like it's on a loop," McCarthy revealed. "It's not a bad choice but sometimes I'm like — I'm just waiting for him to be like, 'If you could just cut your hair a little shorter,' like I'm waiting."

Then, after DeGeneres, 62, suggested she could get "a few tattoos" to match the "Golden" singer, McCarthy said with a laugh, "As if me cutting my hair would be like I'm a dead ringer for Harry Styles … I would just look more tragic." Earlier this year, McCarthy told PEOPLE that she "hit the jackpot" with Falcone, who she first met in comedy school.

"It’s [about] finding someone who you just absolutely are better with. He's nothing but supportive, and he's super smart," McCarthy told PEOPLE of her husband in February. "He makes me gut-laugh, like crazy gut-laugh, four or five times a day. I hit the jackpot!"

McCarthy added that she is thankful for Falcone's strong presence in the lives of their two daughters,  Georgette “Georgie”, 10, and Vivian, 13. The Bridesmaids actress said at the time that Falcone "leads with nothing but kindness."

"We talk a lot [to our kids] about how being kind and good is really important. It's hard to make that resonate in a world where the nastiest comment wins and it's a sporting event to be mean to people," McCarthy said. "Ben and I discussed wanting to put just really good stuff back out into the world."

While appearing on The Ellen DeGeneres Show, McCarthy also discussed a campaign that she and Falcone launched, 20 Days of Kindness, which was crafted on behalf of her upcoming film, Superintelligence.

Describing how the initiative came to be, McCarthy shared, "Well we thought it's a funny time in the world and [we're] kind of promoting this movie that is so about kindness, manners and [that] people are worth saving and that love wins, and we thought if we're all gonna be getting back together in our virtual way, let's shine the light on some really great causes."

Revealing that there are 20 different charities and that they are giving $20,000 to each, the actress also said, "There's just so many people doing amazing things … they're just not as flashy as the negative stuff and we just kind of wanted to shine a light on them because I think it's a good reminder to be like, people are still doing good things, the majority of people are good and kind."

She added: "They're just not as loud so we thought let's give them a microphone."