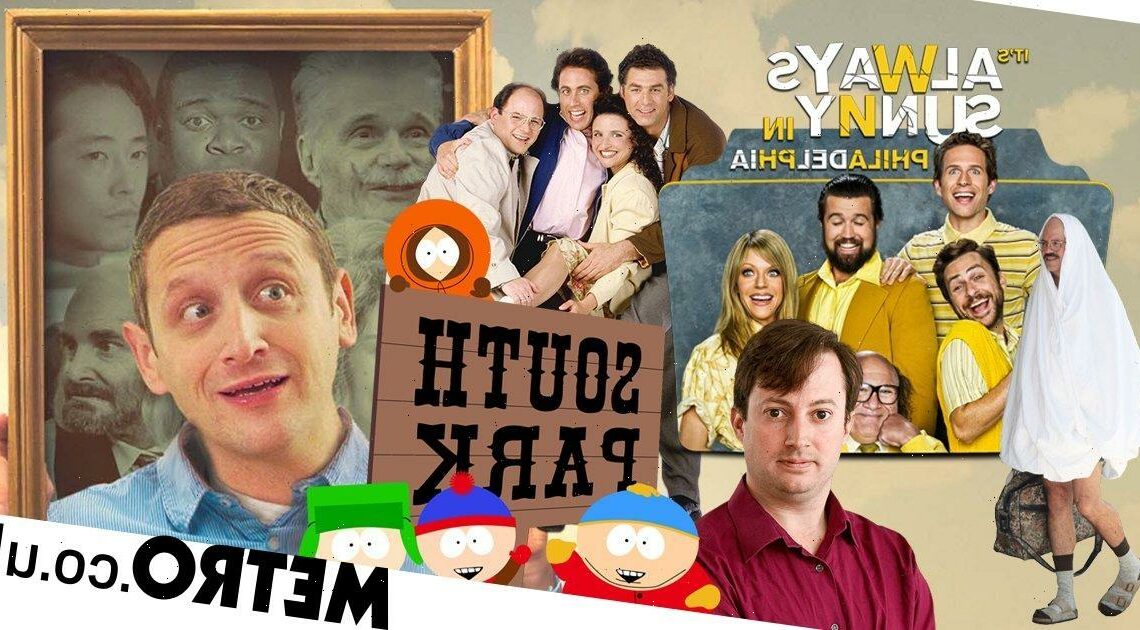 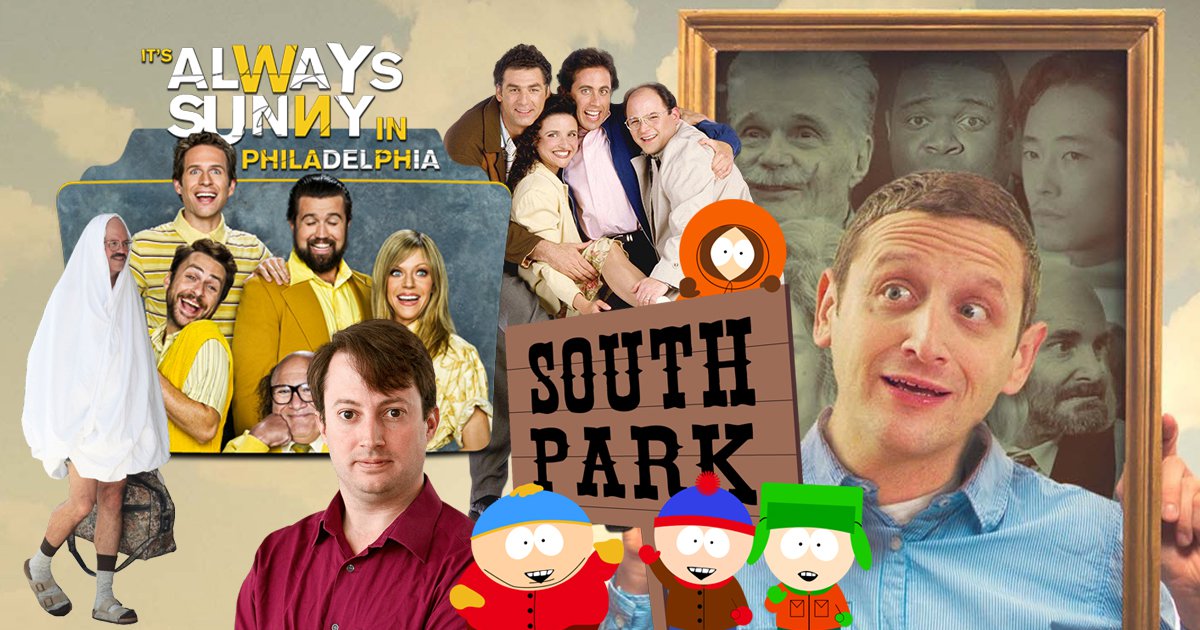 It’s Always Sunny In Philadelphia is the longest-running live-action sitcom in the world, and in many ways, it’s utterly unique.

But while it may now be a whopping 15 seasons in, Rob McElhenney’s creation needed some inspiration to get off the ground, and these came in the form of 90s sitcoms and irreverent comedies.

There are also some brilliant new sitcoms that have either taken their own inspiration from Sunny, or have just found that sweet spot between cringey, horrifying and hilarious.

While we in the UK wait for the 15th season of Always Sunny, we need to find a way to whet our appetite (Apart from rewatching every episode on Netflix or bingeing the Always Sunny Podcast).

So, here are eight Netflix shows you might enjoy if you’re a fan of It’s Always Sunny In Philadelphia – and don’t worry, you’ll find no laugh tracks here.

Before Rob McElhenney brought us the most horrible people on TV, that title belonged to the cast of Seinfeld.

The stars of Sunny have previously said that their show was partly inspired by the iconic and irreverent 90’s sitcom, and It’s Always Sunny has been described more than once as ‘Seinfeld on crack’.

So while you might not see Jerry Seinfeld and Julia Louis-Dreyfus adopt a dumpster baby or drag a corpse up a mountain, its eccentricity and the fact that its cast of characters learn absolutely nothing at the end of each episode makes it reminiscent to Sunny in a way that fans of the show will instantly recognise.

Plus, a season 13 episode of Sunny brilliantly recreated an entire Seinfeld scene shot-by-shot – so that should tell you something.

I Think You Should Leave with Tim Robinson

It’s Always Sunny In Philadelphia is not a sketch show (obviously) but Netflix’s I Think You Should Leave is guaranteed to be a hit for any Sunny fan.

Each new character Tim Robinson introduces could easily be substituted for a Sunny character – you can clearly imagine Frank Reynolds crashing a hot dog car into a shop demanding they find the person responsible, while dressed as a hot dog.

Likewise, getting infuriated by how a date is eating all the fully loaded nachos has ‘five-star man’ Dennis written all over it.

It’s Always Sunny is described as an ‘irreverent’ comedy, but it’s probably better described as pure ‘WTF comedy’ – and who does that better than South Park?

At this point, everyone and their mother has seen at least one episode of South Park, but, as with most sitcoms, it’s the earlier seasons that represents the golden era, and is probably one of the only shows where the characters are worse than the Paddy’s Pub gang.

Because while Sunny is still shying away from confirming whether Dennis is actually a serial killer or just has serial killer tendencies, in season five of South Park the creators had eight-year-old Eric Cartman trick a boy into eating his murdered parents in a chilli.

Netfix has created a handy ‘best-of South Park’ playlist on the site, featuring 21 of the show’s top episodes, so if you’re looking for something to whet your Sunny appetite before season 15 arrives in the UK, look no further.

Imagine if Dee Reynolds was split into three different women and lived in Leeds. As horrifying as it sounds, the result is beautiful: the Channel 4 sitcom Drifters, written by and starring Jessica Knappett.

It follows Meg, Bunny, and Laura as they try to follow their dreams and fix up their lives, getting absolutely nowhere in the process except to make fools of themselves and other people, and catching scabies along the way.

There are as many cringe moments as there are laugh-out-loud moments, and if you like the Dee-centred episodes of Sunny you’re guaranteed to binge the four series of Drifters in a matter of days.

Dee and Dennis may have to work and spend time with their dad-who-isn’t-their-dad, Frank, but at least they have no respect for him.

In the animated, raunchy, and fast-paced show Archer, the almost-charming and almost-sophisticated spy balances his work life with his personal life – not helped by the fact that his mother is his boss.

The show is packed full of WTF moments and belly laugh jokes, and, in pure Sunny spirit, the characters are essentially selfish jerks, particularly the protagonist, Archer himself.

If Mac could actually do all the backflips and karate he insists he’s able to do, and if his ocular patdown actually worked, he could play a pretty good Archer.

Peep Show is almost a perfect match for Sunny fans, with much of Mac, Frank, Dennis, Dee, and Charlie’s best – or worst, depending on how you look at it – qualities condensed into two miserable people.

If you liked Dennis screaming at Mac to DON’T SIT DOWN!, you’ll love Mark ordering Jeremy to wet himself (and then stop wetting himself) at a wedding.

Another modern classic, Arrested Development revolves around a family that is, to put it lightly, dysfunctional.

It’s extremely easy to see how the Reynolds family could fit in with the Bluths – and even easier to imagine how Frank’s shady business practices could have landed the family in their financial situation in the first place.

While George-Michael might not be able to handle Dee and Dennis, Lucille is more than a match for Frank, and they could even bond about how they ‘don’t care for’ their children.

In fact, all we can think of now is how we want to see an Always Sunny/ Arrested Development crossover…

In It’s Always Sunny In Philadelphia, the entire cast of characters is more horrible than the last, and they drag innocent, unassuming people into their mess (case in point: Cricket).

Rick and Morty meanwhile, revolves around one particular terrible person, and the dangers he continuously drags his grandson and wider family into – with limitless potential consequences thanks to the sci-fi and animated features of the show.

But the similarities don’t stop there: as horrific and witty as Rick and Morty is, it’s not afraid to shy away from the more serious moments, with the season two finale a particular example.

And, as any Sunny fan knows, Rob McElhenney’s creation is known for the same thing, with Mac’s dance at the end of season 13 sending shockwaves through the fanbase.

The thing they have most in common, though? They are both downright hilarious.

Demi Lovato Steps Out for Afternoon at Music Studio in L.A.