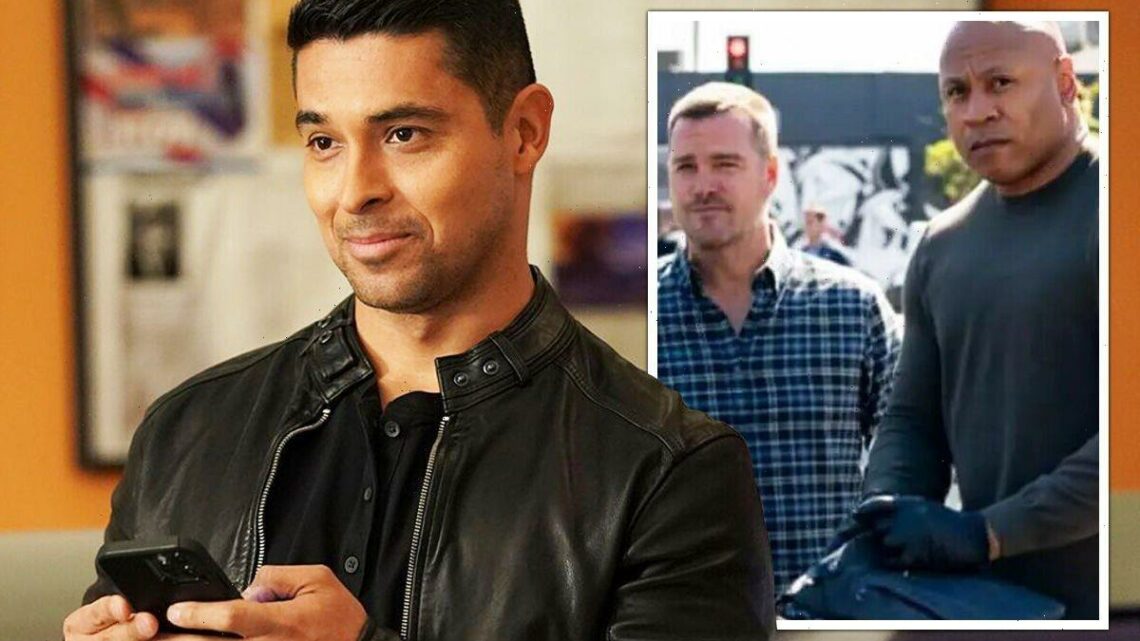 Fans were floored earlier this year when CBS confirmed the NCIS franchise would bring together all three ongoing series for an epic crossover event in 2023. As filming for the episodes continues, Nicolas Torres star Wilmer Valderrama has confirmed stars from NCIS: Hawaii and NCIS: Los Angeles have been on set in his latest peek behind the scenes on his Instagram page.

Wilmer has confirmed key cast members from all three series in the NCIS franchise are currently on set for the upcoming crossover.

The special NCIS event was announced earlier this year and is set to kick off the new year with an expected broadcast date in January.

Viewers have been left speculating which of their favourite agents will be making an appearance in the episodes as several members of the teams have yet to meet on-screen.

The star best known for portraying Agent Torres has now seemingly confirmed a full cast list for the episode in his latest Instagram Story.

His backstage video reveals several chairs embroidered with names who will be very familiar to NCIS fans.

He starts off by confirming both Katrina Law and Vanessa Lachey will be returning as Jessica Knight and Jane Tennant after the NCIS and NCIS: Hawaii crossover earlier this year.

For the first time in over a decade, G Callen (played by Chris O’Donnell) and Sam Hanna (LL Cool J) from NCIS: LA will also be meeting the mainline team.

Plus, Brian Dietzen, Sean Murray and, of course, Wilmer himself, will also have a front row seat for the team’s next mission as Dr Jimmy Palmer, Tim McGee and Torres.

Finally, Wilmer asked his new co-star, Gary Cole, to reveal his name on the chair he was sitting on, confirming new team leader Alden Parker will also be on board.

For now, this is one of the most comprehensive official cast lists for the upcoming episodes, although fans can also expect plenty of other familiar faces to pop up.

In an earlier post, Wilmer posed for a selfie with a huge array of co-stars from the other NCIS spin-offs, many of whom weren’t referenced in his latest post.

He captioned the snap: “Gonna go ahead and leave this ‘first time ever’ over here.

There is also still no word on whether long-standing team leader Leroy Gibbs (Mark Harmon) will be making a surprise appearance following his exit last year.

Some key cast members have still yet to be confirmed, but hopefully CBS will be releasing plenty more details for the crossover before the year is out.

In the meantime, all three NCIS series will be back soon for more heart-stopping action and compelling drama.