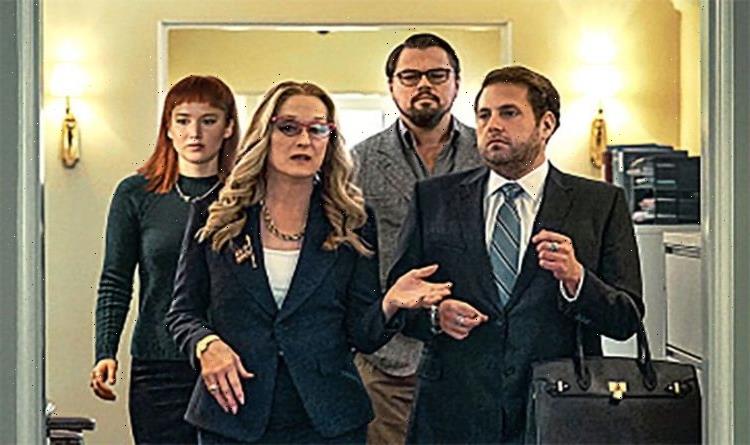 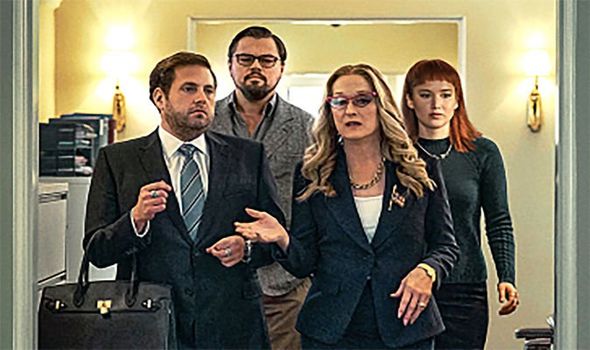 An asteroid more than five miles wide is heading for Earth, poised to strike a direct hit in six months time, ending life on the planet as we know it. But don’t worry, it’s the fictional plot of a thoughtprovoking new movie rather than real life. “This can’t be happening,” says Leonardo DiCaprio, running his hands nervously through his hair. “It’s an extinction level event.”

DiCaprio is playing an astronomer who discovers a speeding space rock that threatens to destroy humanity in the dark new Netflix comedy Don’t Look Up.

Yet while it is a fictitious threat, in a striking parallel to America’s reaction to coronavirus, scientists’ warnings are dismissed by clueless political leaders.

Yet behind the movie’s dark humour lies a genuine threat from planet-killer asteroids. The renowned late physicist Stephen Hawking believed that an asteroid collision was the greatest threat to Earth.

The B612 Foundation, an American nonprofit organisation led by scientists, former astronauts and NASA engineers, reported in 2018: “It’s 100 percent certain we’ll be hit by a devastating asteroid, but we’re not 100 percent sure when.”

Our planet is under constant assault from space dust – chunks of rock and debris left over from the formation of the solar system. Most of it burns up in our atmosphere, but it would only take one strike from a larger rock to cause apocalyptic damage, and there is clear evidence that a few of them do make it to Earth.

The last cataclysmic asteroid strike came about 66 million years ago, killing all the dinosaurs, but as recently as 1908, an asteroid that disintegrated above Tunguska in Russian Siberia destroyed 830sq miles of forest. One the size of a sixstorey building broke up over Chelyabinsk, Russia, in 2013, with a blast stronger than 30 Hiroshima-sized nuclear bombs.

An ancient asteroid crater found in Australia is 250 miles wide. It would only take an asteroid about six miles across to end humankind.

As DiCaprio’s scientist explains in the film, with the asteroid projected to land in the Pacific: “There will be mile-high tsunamis fanning out all across the globe. If this comet makes impact it will have the power of a billion Hiroshimas.”

His fellow astronomer, played by Jennifer Lawrence, only elicits giggles when they go on a TV morning chat show and she says: “We’re trying to tell you that the entire planet is about to be destroyed.”

Hollywood has set its sights on apocalyptic asteroids before, notably in 1998 with the films Armageddon and Deep Impact. But for long-time environmentalist DiCaprio, the movie is a metaphor for global warming, and the world’s politicians unwilling to heed the dire warnings of scientists.

“We’re so immensely distracted from the truth nowadays,” says DiCaprio, 47. “Science has become politicised. I was just thankful to play a character who’s based on so many people I’ve met from the scientific community, and in particular, climate scientists who’ve been trying to communicate the urgency of this issue, and feeling like they’re subjected to the last page in the newspaper.”

Infrared Surgery Explorer mission, who advised DiCaprio and the film-makers, admits that we simply don’t know the entire asteroid population, and urges people to listen to scientists.

“I hope that people realise this isn’t really a disaster movie,” she says. “It’s really more of a commentary on how we react when we hear news we don’t like or don’t want to know.”

Jennifer Lawrence is troubled by scientists being ignored over climate change and Covid-19, saying: “It’s just so sad and frustrating to watch people who have dedicated their lives to learning the truth be turned away because people don’t like what the truth has to say.”

Our solar system contains more than a million asteroids, and on average four new ones are discovered daily. While there are no known planet-killers currently heading towards Earth, the threat is real enough that scientists across the globe are finally preparing to act.

Nasa established the Planetary Defence Coordination Office in 2016 to detect and monitor dangerous asteroids. The space agency launched its DART spacecraft last month on a suicide mission to crash into an asteroid, in the hope of proving that by altering its speed by even a millimetre per second it could change its trajectory – potentially the difference between a direct hit on Earth and a scary close fly-by.

The European Space Agency is also developing a craft with enough mass to knock an asteroid off course. Firing nuclear weapons h t k that oncoming asteroids – the approach takenin Don’t Look Up – is the first choice for many scientists. The bomb doesn’t need to destroy the asteroid, merely shove it out of its path toward Earth.

A planetary defence meeting at Lawrence Livermore National Laboratory in California proposed using a one-gigaton nuclear bomb that could vaporise a onekilometre-wide asteroid and divert an object more than ten kilometres wide.

Los Alamos National Laboratory astrophysicist Robert Weaver, in New Mexico, says: “The nuclear option is for the surprise asteroid or comet that we haven’t seen before, one that basically comes out of nowhere and we have just a few months to respond to it.”

Many asteroids are huge piles of smaller rocks, and a nuclear blast would simply blow them apart – but it could also have the effect of creating multiple rocks still capable of causing a catastrophe on Earth. Worse, if the rocks don’t scatter far enough, gravity could pull the asteroid back together again.

Some scientists have suggested blasting the side of an asteroid with a space-based array of lasers, heating it enough to change its orbit. Others have advised painting an asteroid white with titanium oxide to use solar radiation to alter its trajectory.

A rocket engine could be affixed to the surface of an asteroid, pushing it off course, or industrial digging machines flown to the asteroid surface, using ejected material to propel the rock away, scientists submit.

Perhaps more far-fetched, some have suggested slowing an asteroid by releasing clouds of steam in its path, or by creating giant wire coils that would slow the space rock as it passes through by creating an electromagnetic effect. But the all-important key to diverting an asteroid is to discover it in time. NASA is set to launch its NEO Surveyor space telescope in 2026 specifically to look for asteroids, and other agencies are actively hunting them.

Astrophysicists hope to learn more when the 1,060-ft-wide asteroid Apophis passes only 19,000 miles from Earth in April 2029, burning brightly.

More worrying is the asteroid Bennu, larger than the Empire State Building, capable of inflicting the damage of 70,000 Hiroshima bombs, that will make a close approach to Earth in September 2182. NASA’s OSIRIS-REx mission in 2016 sent a satellite to map the surface of Bennu, set to return with rock samples in 2023.

At least we have a few years to consider Bennu’s approach. A greater danger comes from asteroids that speed Earthward with little warning.

Perhaps former NASA chief Charles Bolden said it best, when he offered one word of advice if we have only a few weeks notice before an asteroid strike: “Pray.”

Or as Leonardo DiCaprio might advise: Don’t look up.

High priests of Marvel fandom: What it really takes to be an MCU YouTuber