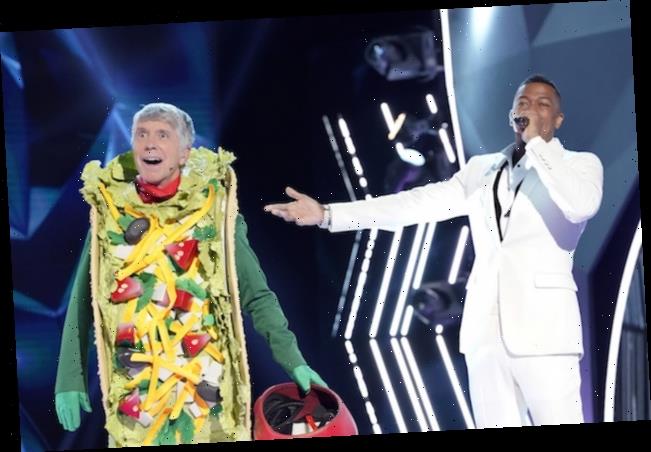 Bob Saget may not be “the friggin’ Taco,” but now we know who is.

Tom Bergeron, host of Dancing With the Stars and America’s Funniest Home Videos, was revealed Wednesday to be the man inside the crispy tortilla shell on Fox’s The Masked Singer. And Saget proved himself Taco-adjacent by showing up to offer a friendly, clue-laden testimonial to Bergeron during a video segment in Wednesday’s broadcast. (The talking seafood castle? Yeah, that was the Full House dad himself.) (Read a full episode recap here.)

Yet none of the judges guessed Bergeron was underneath Taco’s tomato head, despite his acquaintance with nearly everyone on the panel. “It was fascinating, because with the exception of Ken [Jeong] and the guest judges, I know everyone,” he tells TVLine. “Robin [Thicke] has been on the show performing a few times on Dancing. Jenny [McCarthy Wahlberg] and I go way back. Nicole [Scherzinger] won Dancing With the Stars. So I was surprised. On the first week that I was there, Robin came closest, guessing [Bob] Saget. Saget and I were texting. I said, ‘Bob, what, do they think that you shrunk to 5’9″ suddenly?’”

TVLine caught up with Bergeron Wednesday to taco ’bout his Masked Singer experience, including a “refreshing” bout of stage fright. Here’s what he had to say:

TVLINE | I have to tell you: I listened to you sing, and was like, “I know this voice, though I’m not sure who it is.” Then you started interacting with the judges, and that was when I knew it was you.
No kidding. Really?

TVLINE | The cadence of the banter was all you. Given that people are so familiar with how you speak on television, were you at all aware of trying to hide that or change it?
It’s interesting you say that, because that was the one thing I didn’t worry about. I was more worried about some of the physical gestures I’ve been told I’m prone to. And happily, quite a few members of the production team on Masked Singer used to be on Dancing. I was talking with one of the producers, he was cautioning me, “You always drop your mic to the side when Erin [Andrews, Dancing With the Stars co-host] is talking. And Joe Buck, actually, on Fox Sports, had noted that. I was completely unaware of it. I had to be so careful. I was thinking so much about physical stuff, that it didn’t occur to me to worry about the cadence of my speaking. Interestingly, there’s a guy who works for iHeartRadio in New York who does a YouTube thing about Masked Singer, and he pitch-corrects the people when they’re talking to Nick… He pitch-corrected it, and boy, you got me! [Laughs]

TVLINE | Your musical choices were pretty different from each other. What would’ve been your next song?
I said to them, had I survived into the Super 9, I wanted to go back more into my comfort zone, do something in the Harry Connick Jr., Sinatra, Bublé kind of range. The funny thing, for me, was we shot the second show — the “Bossa Nova Baby” — hours after shooting the first show. And I didn’t even ahv time to bask in how well the first one went because I was freaking out about the lyrics, trying to remember the lyrics in “Bossa Nova Baby.” So much so that I forgot all the dance steps. When I looked at it played back, I was OK with the sound of the singing, but I looked like a Taco FrankenElvis. [Laughs]

TVLINE | I would not agree with that, but that’s a funny visual.
Well, thank you. You’re too kind.

TVLINE | Drew Carey — AKA Llama — also was on Dancing With the Stars. But from what I know about this show, you two didn’t know each other were on the soundstage.
No. And that’s the thing — and again, a lot of these people are people I’ve worked with over the years. They are so good about keeping even the various contestants anonymous to each other. The staff would only refer to me as “Taco.” The staff I worked with years ago, and for years, wouldn’t call me “Tom.” It was so difficult because the show was shot on the same soundstage where we do Dancing With the Stars. The crew, security people and craft services — they’re all friends. And I had to just walk by them in my hoodie and my reflective visor.

TVLINE | You’ve got a knack for defusing tense or nervous moments on Dancing With the Stars. Did you ever have a moment when you felt like you needed to be calmed down?
Yeah. There was one time in the second show, when I was more concerned about the lyrics and I was convinced I was going to forget them, that it triggered a little claustrophobia. So I was backstage with my shell and tomato head, and I said, “OK, just slow down. Slow down.” I’m not used to being nervous, to be honest with you. It was almost refreshing to feel a level of anxiety that I had not experienced in quite a long time.

TVLINE | Do you think you’ll take anything from that experience the next time you’re faced with a shaky Dancing With the Stars contestant?
I’m always very conscious, especially in those early episodes, of goofing around in the dress rehearsal. I think we’re fairly notorious for having more R-rated dress rehearsals. The initial goal for me was to relax them. To give them a bit of diversion from the anxiety. So I certainly gained a new level of visceral empathy for them. [Laughs]

TVLINE | What kind of taco were you? It wasn’t clear. Meat? Veggie? Fish?
I honestly don’t know. I think I was an inedible taco. [Laughs] I think that’s the best way to describe me.