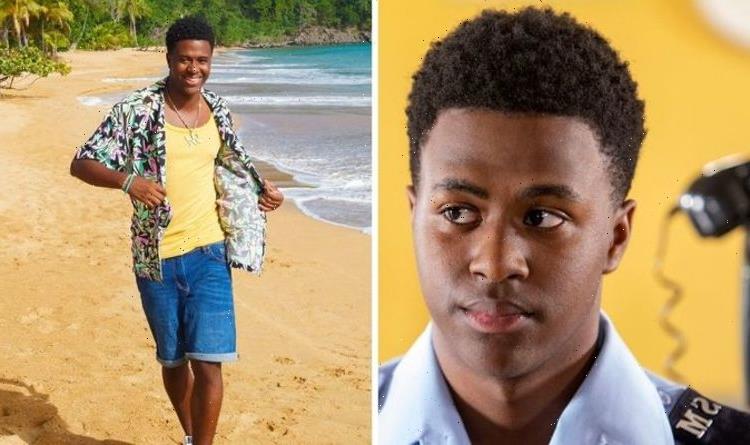 Death in Paradise is marking its 10th-anniversary celebrations with a festive special on Boxing Day. Ahead of the feature-length Christmas episode airing, the BBC show’s newcomer Tahj Miles, who plays trainee police officer Marlon Pryce, revealed a huge challenge he had to overcome while filming in the Caribbean which involved an elf costume.

Tahj landed a role in the popular comedy-drama earlier this year for the show’s 10th series.

He plays a former youth offender called Marlon who has joined the Saint Marie Police Force in a bid to avoid being put behind bars.

The character started off his journey scamming tourists and he finally looks as though he’s on the right path now he’s training to be a police officer.

When asked about his character, Tahj explained to Radio Times: “I think Marlon is in a place in his life where he finally has a bit of stability.

“He finally has a group around him who in a sense is good for him and can set him on the right path and I think he’s actually happy with that.

“As much as he still might be a bit cautious about hanging around with the other side, he does understand that this is the right thing to be doing. He’s not silly.

“Would he be swayed back to the other side? You know what, I don’t think so. I think he’s much smarter than that and he’s clever.

“As I was saying before the way he was going wasn’t the right way to be going.

“It was working for him but in the long run it was only going to go down one route which was in jail which is why he picked to be a police officer instead.”

The star went on to discuss his character clashing heads with officer Dwayne Myers (played by Danny John-Jules) in the Christmas special.

Tahj explained: “They might be similar people but their approach to working as police officers isn’t the same approach. They tend to clash and it’s really funny to watch.”

BBC viewers will watch the duo’s love-hate relationship blossom as they try and solve a death together.

During the festive special, many of the characters had to dress up in Christmas costumes, with Tahj having to wear an elf costume.

Although he initially thought he’d enjoy wearing the costume he was soon faced with a massive problem while filming in it.

Tahj explained: “It’s funny because I really love Christmas and when I tried on the costume and read the script I loved it.

“But I just forgot about where we are and the heat and material of the costume.

“So when we were filming it, I didn’t have the best time because of the heat.”

Death In Paradise is filmed in Guadeloupe, a collection of islands in the Caribbean that stands in for the fictional Saint Marie.

The average temperate out there is a scorching 30 degrees celsius, so it’s no wonder Christmas costumes were difficult to film in.

The Death in Paradise 2021 Christmas special will air on December 26 at 7.30pm on BBC One.