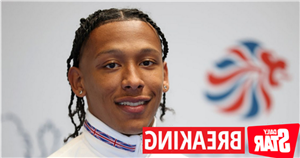 Olympian Kye Whyte will be taking part in Dancing On Ice in January 2022, ITV has confirmed.

The athlete won a silver medal at the Tokyo 2020 Olympic games for BMX racing – but now he will be testing out a whole new sport as he takes up a spot on Dancing On Ice.

His decision to take part in the show was announced on CBBC's Newsround this morning as he told hosts he was "feeling good" about signing up.

Kye has known that he would be signing up to the show for around three to four weeks, he said, adding: "I think I was the last person to get selected.

"I was told not to tell anyone and I've been waiting for the big reveal. My family knows. My dad and brother roller-skate so I think they're excited."

He explained that when he did the audition he related it to roller-skating, adding that he's feeling "confident" and doesn't mind if he falls.

The star said: "I'm quite fearless", as he prepares to make his debut.

As an avid gym-goer, he said that he's not too concerned about lifts with his skating partner – but the routines are certainly making him nervous already, with Kye adding that he's "very forgetful".

After landing second place in the Olympics with his BMX career, it looks like Kye has his sights firmly set on the gold this time.

He said: "I think I can win Dancing On Ice. I’d love to see if I can make the final because, as I said, I’m very competitive. You know what? I want to make the final!

Kye is the latest celeb confirmed for the show as he joins the likes of Liberty Poole, Rachel Stevens and Corrie's Sally Dynevor.

The show, hosted by Holly Willoughby and Philip Schofield, is set to return in its usual spot in January 2022.

Zodiac Killer suspects list: Has the case been solved?