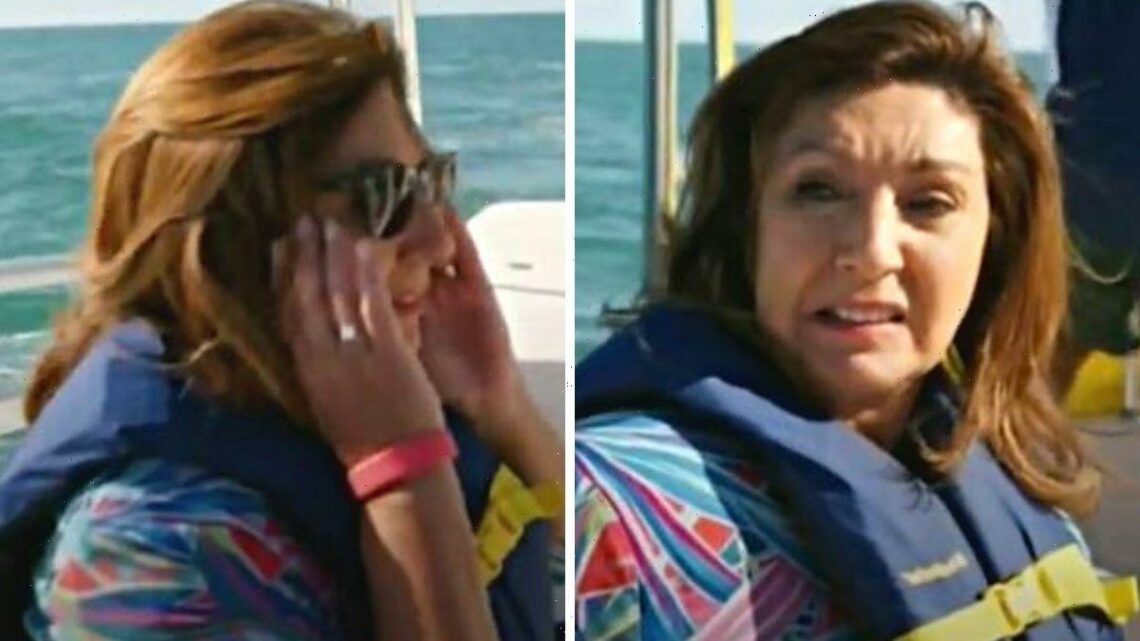 Jane McDonald says she is 'nervous' before paragliding

During the most recent instalment on the hit Channel 5 show Holidaying with Jane Mcdonald, the singer was in Florida exploring everything the US state has to offer. At one point she decided to go parasailing but seemed to have second thoughts as she explained she was “really nervous” and that her stomach was “churning” before she took to the sunny skies.

On Sunday’s episode, Jane visited the Florida Keys, a group of tropical islands off the state’s southern edge.

In an effort to be adventurous and test out the many activities the waterside locations had to offer, Jane agreed to go parasailing.

She put on a brave face as she boarded the boat and was told what to expect.

Captain Hunter revealed: “Alright Jane, you’re going out about a quarter-mile between the Gulf of Mexico and the Atlantic Ocean, that’s where we’re going to be flying, about 400 feet over the water today.”

“Okay, thank you,” Jane replied before admitting she was “really nervous”.

“When you’re up in there, there’s a possibility of seeing turtles, sharks, all types of fish, it’s like looking down at an aquarium,” added the captain.

He continued: “You never know what you’re going to see.”

Narrating the show, Jane explained: “You know I love boats, but I tend to be on them rather than above them.”

As she sat at the edge of the boat waiting, Jane reflected: “You know, it’s funny.

“Every single time I do something like this, I’m always really nervous and every time I finish it, I’ve had the best time.”

It seemed she had plucked up some courage as she went on: “So although you might feel nervous doing stuff like this, do it anyway.

As the captain got Jane’s parasailing seat ready and the winds lashed against it, Jane quickly withdrew her previous statement.

The 59-year-old confessed: “My stomach’s churning more than them waves!”

However, Jane pushed herself to take a seat and was lifted into the air above the seas.

“This is amazing!” She soon remarked. “It’s so lovely and quiet.

“It’s so tranquil up here – this is fantastic. I’m sitting in a chair really comfortable, and then you’ve got this amazing experience going on.

“I was really nervous but actually, when you get up here it’s as near to heaven as you’ll ever get.”

As she left the boat later, she added: “Oh, that was incredible.” When asked if she’d do it again, she responded: “In a heartbeat.”

“It’s like you’re in a different world, isn’t it?” She told Captain Hunter. “That was incredible, that is probably the best thing I’ve ever done.”

Holidaying with Jane McDonald continues on Sunday at 9pm on Channel 5.