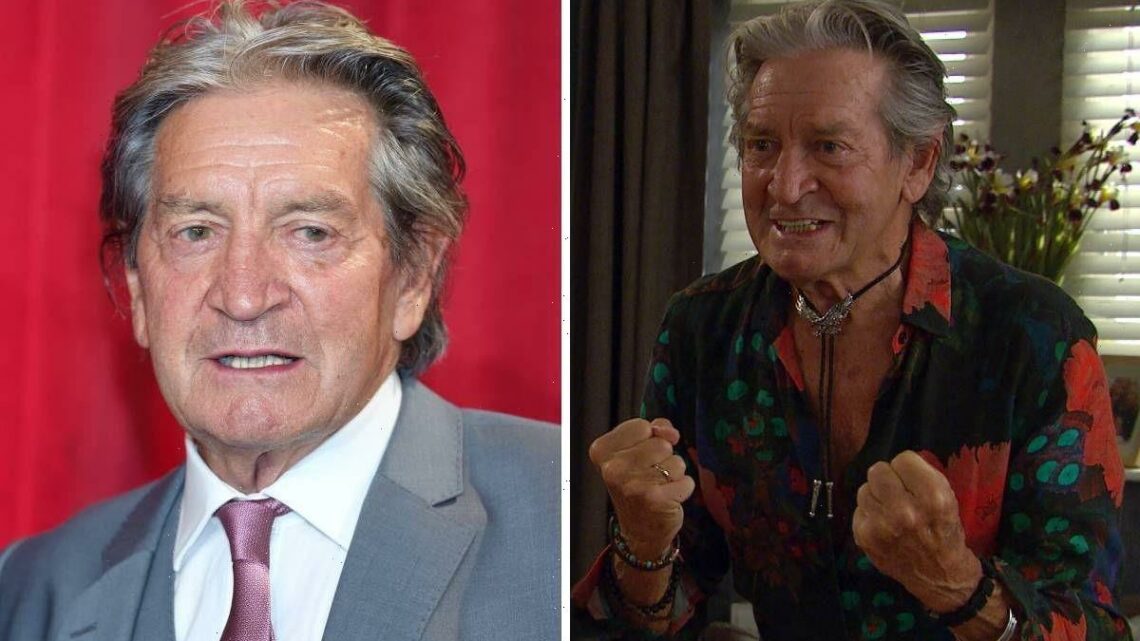 Emmerdale: Cathy and Arthur chat in the cafe

Emmerdale star Patrick Mower has been in the ITV soap playing Rodney Blackstock for 22 years and has remained a fan-favourite. He is a devoted family man, eager to help his loved ones whenever they are in need. As of late, Rodney’s focus has been on his youngest daughter Nicola King (played by Nicola Wheeler) who recently went to court to give her testimony on an attack.

Rodney stepped in to look after Nicola’s children and step-children so she could focus on attending court.

She had been violently attacked by a girl gang on a night out and as Naomi Walters (Karene Peter) found her, Nicola thought the youngster had also hurt her.

The jury thankfully found the other four girls, who were responsible, guilty of GBH, and Naomi of a lesser charge which would mean no jail time.

So justice was served all round, despite Nicola still feeling wary of Naomi following the ordeal.

He is the oldest serving cast member on the show with just a few other stars closely following in his footsteps.

Actor Chris Chittell, who has been starring in Emmerdale since 1986, is 74 years old.

He is married to actress and co-star Lesley Dunlop who is behind Brenda Walker in the soap.

Some fans were concerned last year when it was confirmed his ex-wife Diane Sugden (Elizabeth Estensen) was leaving the village.

At the time, Rodney was trying to win her back but she left without him to start a new life in Spain.

Mower confirmed last year though that he didn’t have any plans to leave the soap in the immediate future.

In fact, he was already thinking about his character Rodney moving on with another woman.

Mower explained: “One gets to a point, when you’ve been in Emmerdale for this long, when you’re filming in the village and hear an airplane flying over, you think: ‘Oh is that plane going to crash on Rodney Blackstock?’

“They’ve got rid of characters in the past with plane crashes!

“But no, I would carry on. I would like to, obviously when contracts come up, you sometimes talk about what you might be doing in the future.

“I would quite like, maybe next year, to have a little bit of luxury.

“It’s about time Rodney was looked after! Maybe a rather attractive lady who has a lot of money, that would make him happy!”

Prior to joining the Emmerdale cast in 2000, one of Mower’s first big roles was in the 1970s spy series Callan, before playing DCI Tom Haggerty in Special Branch.

He has also been in Target and had a role in one of the last Carry On movies, Carry on England in 1976.

Mower has been married to wife Anya Pope since 1996 who he shares one son with called Maxin.

He also has two older children, Simon and Claudia, from his previous marriage to Audrey Giles.

Emmerdale continues four nights a week at 7.30pm on ITV.