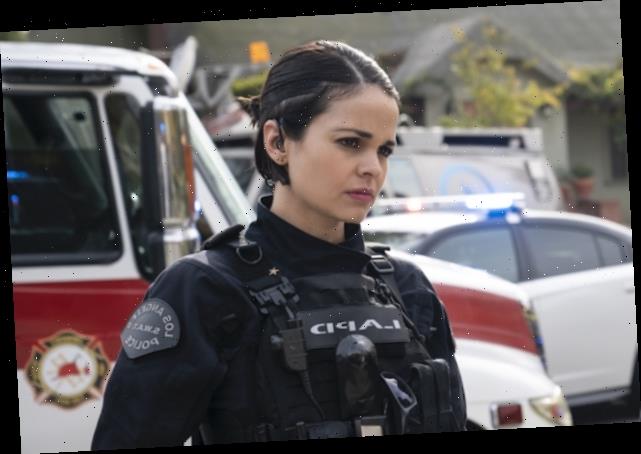 This week on CBS’ S.W.A.T. (Wednesdays at 10/9c), the men’s rights movement lands on the team’s radar, setting in motion a series of events that will lead Officer Chris Alonso to debate disclosing the “very personal” reason why she became a cop. TVLine invited series vet Lina Esco to preview Chris’ dilemma, stemming from her fears about the team being privy to her “deep, dark secret.”

TVLINE | This week, the show is taking on the men’s rights movement. What does that look like on S.W.A.T.?
This episode was written by Sarah Alderson, and it’s based on some true stories out there about men’s rights groups — and it obviously becomes something personal to Chris and something that she wants to take on. That’s what starts off the episode, when they find out that there’s a men’s group behind these dangerous attacks that are happening.

TVLINE | Lynch winds up asking Chris to do some press on behalf of S.W.A.T. To what end, and what is Chris’s reaction to this idea?
The No. 1 reason why she doesn’t want to be doing this interview is, “Why are they asking her and not asking one of the guys?” And this is what happens in real S.W.A.T. [Female team members] don’t want to be feeling like they’re more important than the guys, or just because they’re the only woman on the team they get to have this kind of attention, especially in this climate. But also, we haven’t really touched a lot of Chris’ backstory, on why she became a cop, and that is a very loaded question for her. She does not want to be entertaining it or digging into it any deeper, or telling her teammates about it because it’s obviously a very personal thing that happened to her.

TVLINE | Thus far we have learned that when Chris was 13, her mother died in a hit and run. And at age 15, Chris was abducted in a case of mistaken identity. What new things will we learn about her this week?
We are going to learn that she was raped, and that was the main reason why she wanted to become a cop — to do what she can so this wouldn’t happen to someone else, and if it did she would be there to hold that person accountable. She wanted to be a protector and a stopper from these incidents happening and spreading.

TVLINE | And that’s something that she hasn’t told anyone on the team yet, even off-screen?
Right, because that’s the thing — she doesn’t want to be undermined, she doesn’t want people feeling pity for her or her being seen as a victim. What happens with people that have been raped or sexually assaulted, they believe that it was their fault, they blame themselves for putting themselves in that situation, so they carry this sense of guilt and isolation with them that ends up becoming a very deep dark secret that they’d rather hold deep down inside and normalize, as opposed to talking about it and feeling the discomfort that comes with sharing something so embarrassing and deep. Talking about it, opening that can of worms, is only going to make things worse for her — at least, that’s the story that she has created in her head about being open and talking about it. We’re going to see the beginning part of what that would look like if somebody peels away the first layer of skin, in terms of a rape conversation.

It’s a very, very, very huge reason why she became a cop, and it’s also a very, very, very complicated thing to even begin to imagine what it would look like if her teammates knew about it. She doesn’t want to be victimized. She doesn’t want them to be looking at her differently. But again, that is the thin line of, “Do we become silent? If so, what is that going to do, with me not saying anything as opposed to putting myself out there, speaking about it and making sure that this doesn’t happen again by creating a much bigger conversation?” You see that debate back and forth of, “Should I do it or not?” Things will have to get really bad for her to decide to speak up no matter the pain, the cost, the ramifications or risk.

TVLINE | Lastly — and on a lighter note — I am trying to remember if the thruple thing is fully behind Chris now. I know that in a late November episode, she got caught trying to give Kira and Ty the Irish goodbye….
What happens with thruple relationships is at some point they’re not self-sustainable. At some point something happens, or two people end up saying this is not working, or the new person ends up falling in love with one of them and kind of breaks the whole thing. So yeah, it kind of fizzled out when Chris realized that these people were still going to get married, and things were going to continue as they were, and she was always going to be the third wheel. Chris had to walk away from it no matter how much she loved Kira.

Want more scoop on S.W.A.T., or for any other show? Email InsideLine@tvline.com and your question may be answered via Matt’s Inside Line.